Despite warnings to stay away from Kabul Airport, due to credible intelligence of an imminent terrorist attack, two explosions at its perimeter have killed at least 90 people and injured more than 150 more.

When making a statement on the tragedy, which took the lives of at least a dozen US forces personnel, President Biden was sombre and visibly moved, as he prayed for those affected.

"We are outraged and heartbroken" — President Biden on the deaths of at least 12 US service members and many Afghans following an attack in Kabul pic.twitter.com/Nnn9dwhS6F

Donald Trump Jr. saw it as an opportunity for political point scoring, making this judgemental remark. 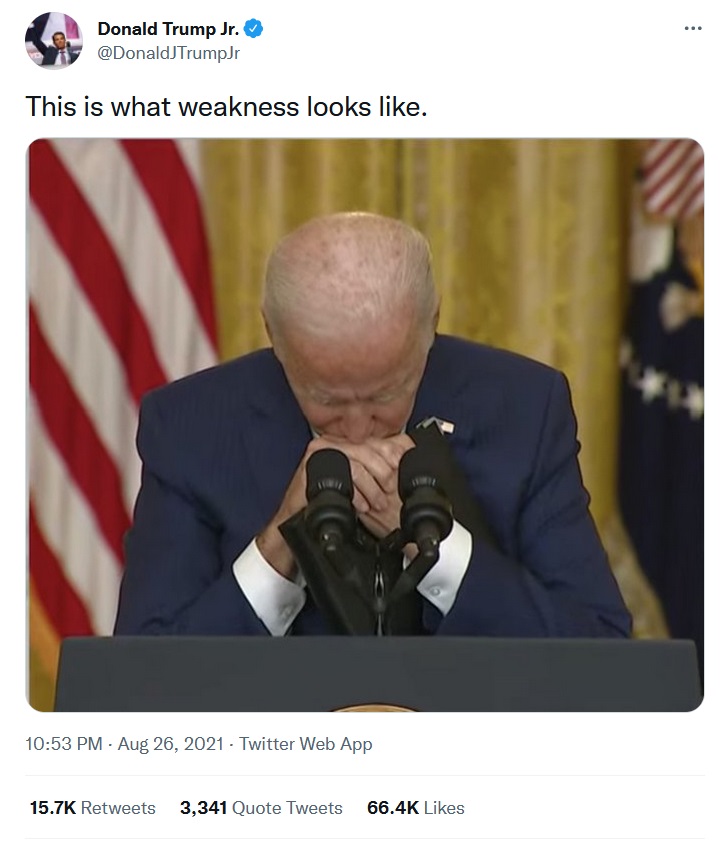 This is a president whose two sons served in the military empathizing with those who just lost their children. Your dad's son is a clown with an inferiority complex tweeting about things he knows nothing about. https://t.co/ZEpGKeZ7vc

Sometimes it occurs to me that junior has a very broken emotional life. pic.twitter.com/CFhjF4MCES

This is what a father who loves his son looks like.

Don Jr thinks praying makes you look weak. We told y'all they were fake Christians but you just wouldn't listen. https://t.co/oTI45AEuyd

it's the look of someone thinking before they speak. no wonder it seems so strange to you.

You’re a psychopath raised by a monster.

What branch of the military did you serve? 🤔

And this kind of observation is why you'll end up having had four wives, and six children, none of whom like you.

Ty Webb had a different view of weakness.

Junior has yet to respond.