On Monday, the government revealed its new trade envoys, who will help the UK grab all those new post-Brexit opportunities and herald the era of the sunlit uplands.

Among those charged with boosting the future of the Great British economy is the safe and expert pair of hands of *checks notes* cricketer, Brexiter and the wholesome face of Shredded Wheat, Sir Ian Botham.

Here’s how Liz Truss made the announcement. 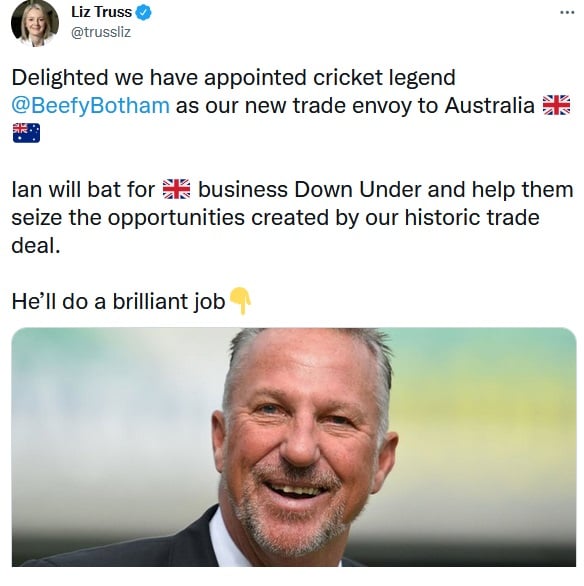 England footballer Marcus Rashford should stick to football and not get involved in politics when he tries to make sure kids don't go hungry.

But former England cricketer Ian Botham should get involved in politics & is appointed a government trade envoy.

There were plenty more.

When I was 9 years old this man was my hero, but even at that tender age I had a niggling sense that he might not be the best choice of person to identify investment opportunities and maximise bilateral trade https://t.co/vlheUBJ853

".. and then he said he was making Ian Botham a trade envoy" pic.twitter.com/zzb4NsZkJK

Up next Eddie the Eagle Edwards to become Governor of the Bank of England. https://t.co/GvF0lb4tot

Tune in next week, when Matt Le Tissier will have a go at being Attorney General. https://t.co/gOFQ7w7DtD

You’re left with a pool of people so tiny

What a load of bullshit https://t.co/4P7sziDAjg

Congratulations that's quite an achievement, replacing Prince Andrew with someone with even less credibility. 🤦 #BrexitShambles https://t.co/gRhJsBlbjw

A tenner says Rolf Harris made the shortlist. https://t.co/6mhRajea4u

Delighted beefy Botham has joined our team to really sell the UK as a global brand.

It's all so very "What Would Donald Trump Do?" He would announce the appointment of a risible candidate to be trade envoy to distract from the catastrophic handling of Afghanistan by Bodger and angular tetchy humanoid Dominic 'Deckchair' Raab. It worked.

Count Binface had this apt conclusion.