Just as has long been the case in the US, the wearing of masks in UK politics has clearly become a matter of left and right, with images from Wednesday’s parliamentary recall showing how deeply the issue cuts along ideological lines.

It's not the main point today, but check the masks left vs right. Shocking. pic.twitter.com/zjxgkpJwEv

These images show the difference in attitudes to masks on either side of the House.

This is the government’s own current guidance on keeping yourself and others as safe as possible from Covid-19. 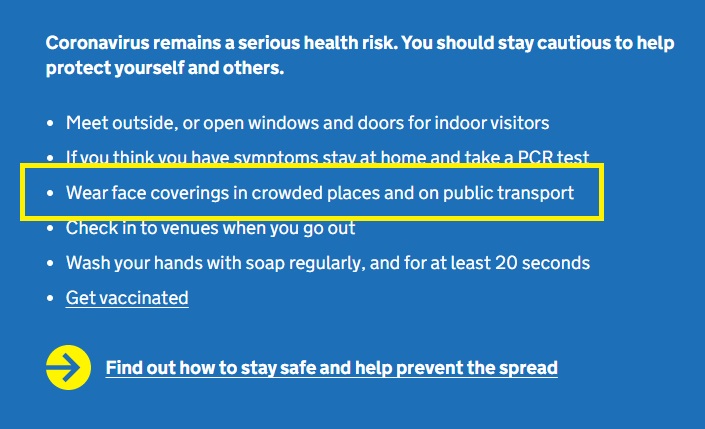 MPs were told on Monday they would be "strongly encouraged to wear face coverings in the chamber" based on "the current public health risk assessment for parliament".https://t.co/pKg7qoeq0W

Not for the first time, unions with staff working at the Palace of Westminster had to complain about government attitudes to their members’ safety.

NEW: Parliament's trade unions have written to the Speaker after many MPs chose not to wear masks in yesterday's debate.

This is what tweeters thought of the contrast.

This says a lot about the government’s attitude towards covid.

Most Tory MPs ignoring their own guidance to wear a mask in a crowded space.

How do they expect others to follow the advice if they publicly won’t even do it themselves?https://t.co/v02Sq9ZRFR

This country summed up in one photo https://t.co/7K5jhuR4Xu

another "fuck the lot of you" and "don't trust the experts" message from the Conservatives as they sit together in a crowded place without masks. To be ruled by such weevil larvae is wretched. pic.twitter.com/mPx8Wozyma

Johnson "Yes Yes of course, so would I"

These images show how one side of the house actually cares about others while the other couldn't care less. https://t.co/dBWEreRGD8

Francois sitting here thinking about how if Covid comes anywhere near him he’s going to give it an SAS chop pic.twitter.com/QMsKtu8WWH

This is just like in thd US GOP and the Dems.

I don’t say this often but can we give Jeremy Hunt a 👏 pic.twitter.com/Cl8WXd5Dhy

Jeremy Hunt masked here not because of Covid but because of who he's sitting next to, presumably… pic.twitter.com/hggQbSXpTt

The bar is literally below sea level for rich white men https://t.co/885jS77HYM

Positive cases after this will make an interesting study group! https://t.co/IoRwaigPaA

“I was at a hospital the other night where I think a few there were actually coronavirus patients and I shook hands with everybody, you’ll be pleased to know, and I continue to shake hands.”

If you were wondering whether the guidance on masks is changing …

Astonishingly, Boris Johnson’s spokesman says the government still expects people to wear masks in crowded indoor spaces, despite not a single member of the government frontbench wearing one in the packed House of Commons this morning.