Except we can’t say we weren’t warned about this sort of thing. And it turns out predictions of what would happen go all the way back to 1912, in this newspaper clipping which has just gone viral on Reddit. 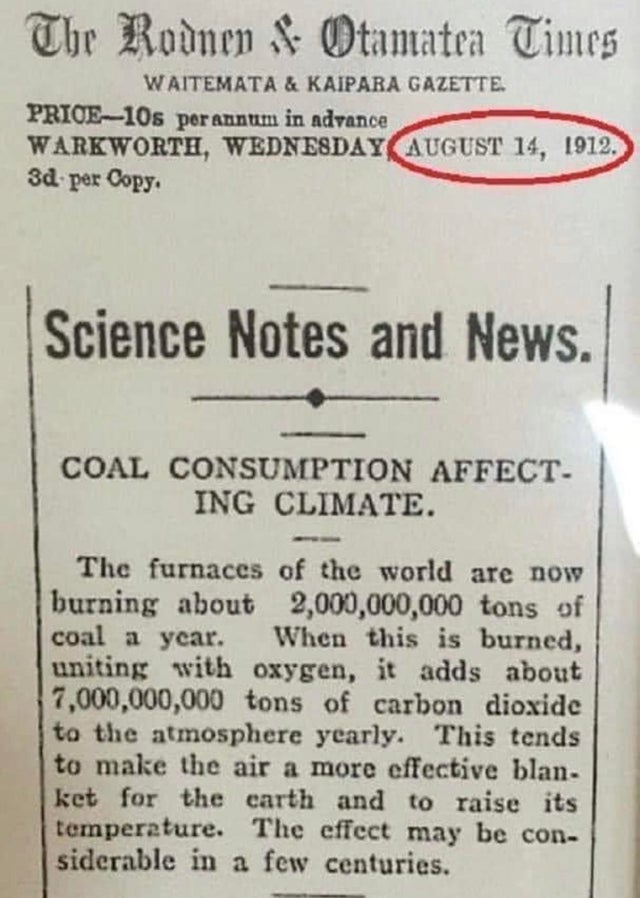 When this is burned, uniting with oxygen, it adds about 7,000,000,000 tons of carbon dioxide to the atmosphere yearly.

‘This tends to make the air a more effective blanket for the earth and to raise its temperature. The effect may be considerable in a few centuries.’

Bang on – all except the number of centuries, obviously.

It’s from a New Zealand paper – the Rodney and Otamatea Times, Waitemata and Kaipara Gazette, to be precise – and is absolutely the genuine article, according to the good people of Snopes.

Snopes found out that the origin of the article can be traced even further back to an edition of something called Popular Mechanics, which appeared earlier that year.

Back to the present day, and here’s what people made of it on Reddit.

‘We’ll show that guy, we will ruin the earth twice as fast as he thought possible!’
booksfoodfun

‘For anyone wondering, we now burn in excess of 8 billion tons of coal per year.’
TooStonedForAName

‘We’ve had 110 years to fix the issue.’
profullstack

‘He thought it would take centuries. So cute!’
henriqueroberto