Anti-vaxxer self-own of the week

The minority of anti-vaxxers who continue to resist all scientific evidence to the contrary are nothing if not enthusiastic in wearing their (lack of) knowledge on their sleeves.

But as we never tire of pointing out, it doesn’t always end they way they hoped it would. And this anti-vaxxer self-own is a classic case in point.

‘Own the libs by staying at home,’ said OverPaladiin who shared it on Reddit. 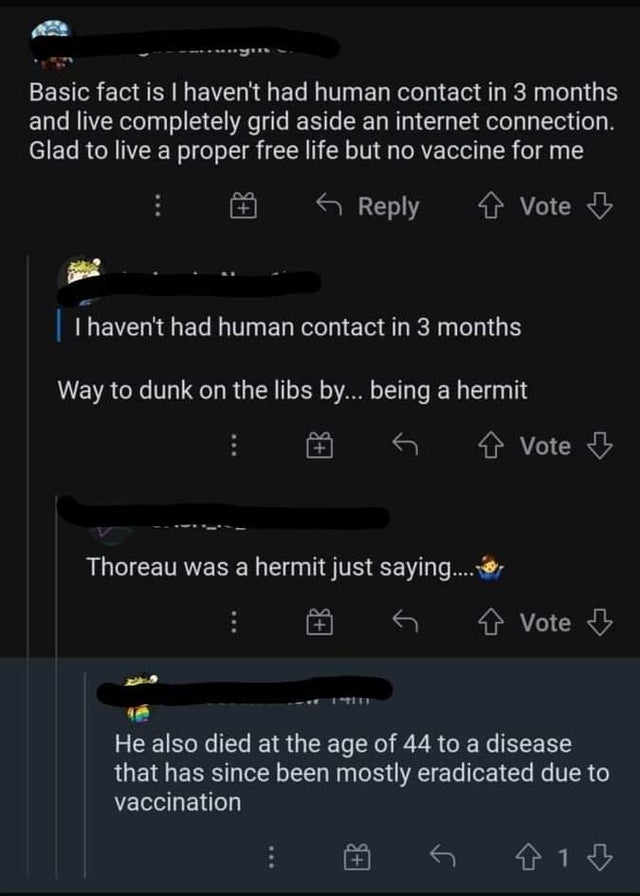 Henry David Thoreau was a – Google, Google – 19th century naturalist, writer and philosopher remembered as a hermit who tried to avoid people and society although the truth was rather more complicated than that.

And just a few of the comments the exchange prompted on Reddit.

‘I freakin hate when Thoreau is pointed at as some kind of heroic “I live in the woods and it’s wonderful” “simple life” hero. If my mom did my laundry and brought me food, and town was just a short walk away so I’d go there and grab a bite or to work a few days a week in order to “get back to nature” I’d be advocating for that life too.’
Celtic_Oak

‘Uhhhh, the internet is the grid.’
Alarming_Ad8005

These 17 fabulously awkward exchanges are hilarious and all too relatable

Good sports have been joking about the Olympics – 14 funny favourites