The Unsurprising News of the Week was Piers Morgan’s scathing reaction to the US multi-medal-winning gymnast, Simone Biles, pulling out of some Olympic events due to struggles with her mental health.

Here’s what he said. 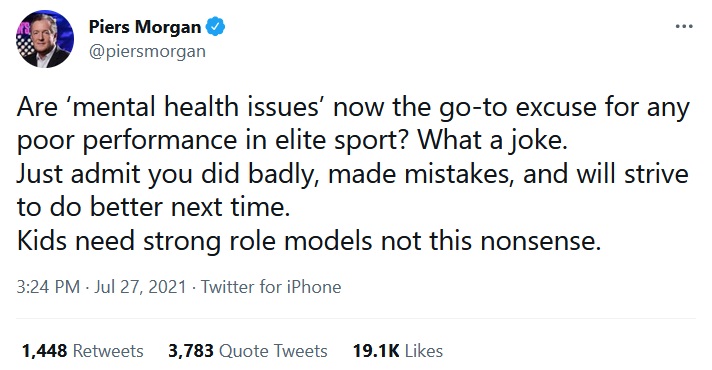 It echoed his framing of Naomi Osaka as an ‘arrogant spoilt brat’, after she stated that she wouldn’t be giving media interviews during the French Open, for the same reason.

He has previously suggested that Meghan Markle lied about struggling with her own mental health, in his visceral reaction against her and Prince Harry’s interview with Oprah Winfrey – a position which resulted in Morgan storming off the GMB set after being criticised for it.

The backlash to his Simone Biles comment came swiftly.

Says the guy who had a meltdown after losing to the weatherman? 🤔 https://t.co/w0nqhNEsEU

Are narcissism and sociopathy the go-to excuse for consistently poor performance in elite journalism?What a joke.
Just admit you did badly, made mistakes, and will strive to do better next time.
Your kids need strong role models, not a deluded, bloated, poundshop Hopkins for Hire https://t.co/NQrH5sMapN

Piers Morgan aka Metric System Bill O’Reilly shouldn’t be allowed to speak until he can do a backflip on a balance beam.

CNN’s Brianna Keilar reported on the attacks being made on the gymnast by ‘white male talking heads’, with a particularly savage takedown of Piers Morgan for his response.

.@brikeilarcnn: “Piers Morgan, whose only athletic claim to fame is that he ran off the set of his former tv show simply because a host questioned his criticism of Meghan Markle…” pic.twitter.com/ccV34Ibv3d

“Piers Morgan, whose only athletic accomplishment is running off the set of his former tv show when another host simply questioned his criticism of Meghan Markle.”

Of course, people loved to see it – and here are some highly representative reactions.

Brianna Keilar dragging the shit out of Piers Morgan this morning is EVERYTHING!😩😭😂😍🙌🏾 pic.twitter.com/tHYce9D8NB

Brianna Keilar with a master class in dragging. https://t.co/Ex2xvQdVw1

Among Simone Biles’s critics, @PiersMorganLive, whose only athletic accomplishment is running off the set of his former tv show when another host simply questioned his criticism of Meghan Markle. https://t.co/bNql3oC0W7

It got this clapback from Piers Morgan.

Hi Brianna,
a) You have no clue about my athletic accomplishments. (💪)
a) I also ran back, realising that quitting is cowardly.
b) I know you love virtue-signalling, but ask your Green Beret husband what he thinks of people who quit on their teammates in the heat of battle… https://t.co/daoWQ74IDj

We can only hope his athletic accomplishments are better than his grasp of the alphabet.