The Royal National Lifeboat Institution (RNLI) is a charity that rescues those who get into difficulties on or near the coast, which is clearly a thing to be applauded, right?

Not for some people, and you could probably guess who a couple of those might be.

This man, for example. 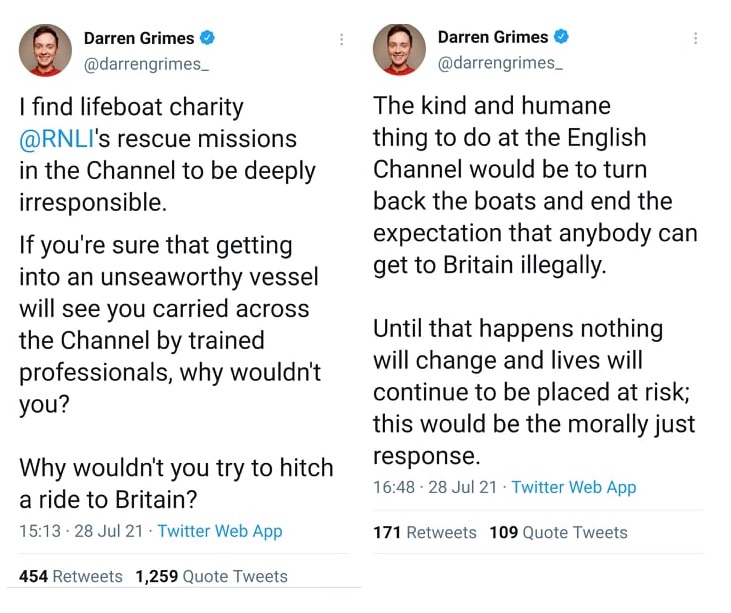 Another shot across the bow came from Nigel Farage, who used his platform on GB News to describe the RNLI as a “migrant taxi service”.

They posted this rebuttal, with sensitive footage of their work.

We're proud of the lifesaving work our volunteers do in the Channel – we make no apology for it. Those we rescue are vulnerable people in danger & distress. Each of them is someone’s father, mother, son or daughter – every life is precious. This is why we launch: pic.twitter.com/lORd9NRpdP

It prompted another rant from Farage, which we won’t bother sharing, but it involved him addressing RNLI bosses with these words –

“(I)f you … want to pick a fight with me, that’s fine by me, I’ve fought people bigger and uglier than you”

We weren’t sure whether to give him the oxygen of publicity, for reasons best expressed by James O’Brien.

Not for the first time, I wonder how hard it would be to completely ignore Nigel Farage. Easier said than done, I know, but his profile & 'relevance' have depended on people who find him disgusting for a while now.

But thankfully, for our faith in human nature, most people have been offering their support to the charity, and condemning the dreadful point of view that paints them as anything other than heroes, and we thought these takedowns deserved an airing.

Demonising the RNLI was something I never had on my UK meltdown bingo card, I must admit.
Next – guide dogs for blind people are secretly communicating with their cultural marxist friends via BLM-coded tail wags.

The UK I love is founded on compassion, fairness and generosity of spirit.

If you are attacking lifeboats, you are not a patriot. You are a moron.

The U.K just 9 years ago:
The Olympics is showing the rest of the world what a vibrant, exciting, inclusive, multi-cultural place this is.

The U.K now:
British lifeboats for British people.
If illegal immigrants drown trying to get here then that's their fault

Keep up the great work @RNLI because as some of your disparagers repeatedly told us All Lives Matter.

To carry out the Holocaust, the Nazis had to convince people that Jews and others were subhuman, vermin, undeserving of the same rights as others, even the right to live.

In unrelated news, Farage is continuing his campaign against the RNLI for saving refugees from drowning.

While the RNLI are great at salvaging all those lost at sea and about to be washed-up, even they won’t be able to help you and your career love. https://t.co/B26smRLxpL

Racists: "WE DIDN'T MEAN THOSE LIVES"

BREAKING: Priti Patel has just deported Darren Grimes out of concern he was trying to steal her job. Darren is already looking into the possibility of returning to the UK in a leaky dinghy, but the RNLI says it would be irresponsible to assist him. #CraftyWank