Laurence Fox has proudly declared his opposition to the Covid rules throughout the pandemic, with posts like these – 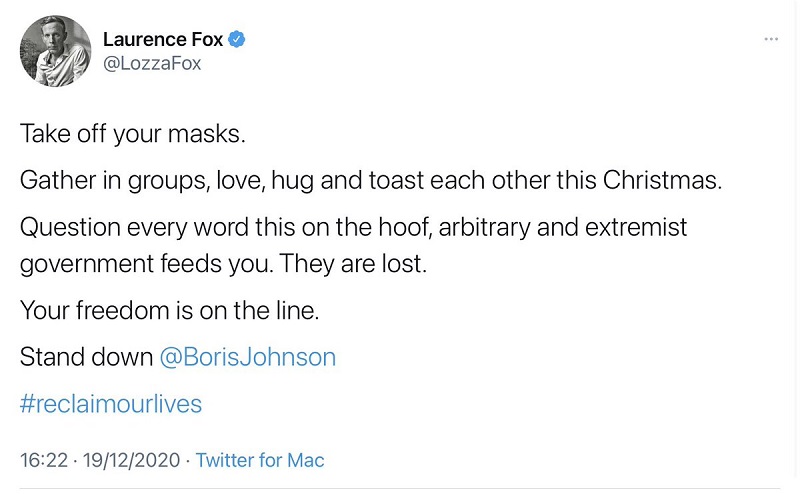 It all had a faint whiff of right-wing virtue signalling about it, with the performative defiance of an 8-year-old refusing to try the veg because they wanted pizza.

On Friday, he shared this Venn diagram on Twitter. 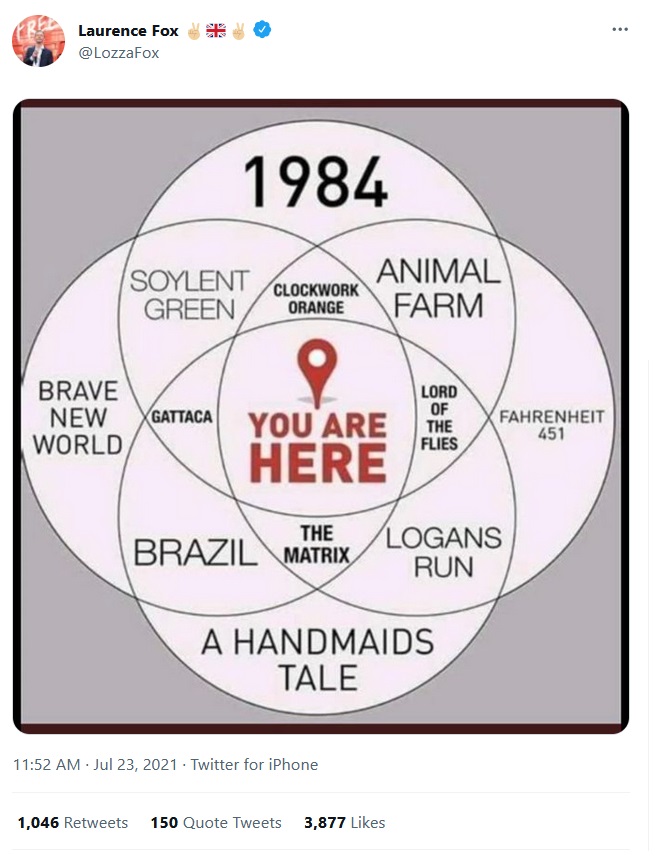 Somebody – almost certainly not Fox, himself – took time out of their day to slot the names of dystopian novels into the diagram in a way that would have John Venn spinning in his grave.

To be fair a creative way to list your failed auditions. https://t.co/LG4fyRji5a

hate when I have to clap for Big Brother after I’ve dropped soma, having sent my forced, engineered cannibal child off to the island’s book-burning club. I work for a pig at the whimsical bureaucracy and hope to be head of Ludovico before I’m killed at 30. Hope I’m not a battery! https://t.co/64uzMtDNUr

The worlds depicted in "1984" and "Brave New World" are essentially the opposite of one another. You can't have a dystopia that programs you to be mellow and happy in hopes you'll shag your life away AND repress everyone's sexuality to keep them filled with rage at the same time. https://t.co/YKMeRctoWf

You might be there. I’m not. I’m vaccinated and free.

Amazingly, Laurence Fox has managed to use a venn diagram to demonstrate that he doesn't know anything about maths or literature at the same time.

Apart from anything, it's *The* Handmaid's Tale. But… just generally, what the fuck is this diagram? pic.twitter.com/zWF4DzrJww

This Venn diagram helps explain why former actor Lawrence Pox failed to get into university. He doesn't understand the concept of Venn diagrams pic.twitter.com/oKeUI6RXhe

Personally, I have no idea what a book about public school boys being misplaced from their projected destiny, losing their veneer of civility and then running around a small island being absolute tools has to do with Laurence Fox.#lordoftheflies pic.twitter.com/JPe1esIqhf

Can't wait to escape Big Brother by taking the red pill, just to find out we live in a society run by communist pigs. https://t.co/htTz7vej1z

I mean we can all make venn diagrams pic.twitter.com/VWguyI8eTp

Alex Bell had a more positive take on the whole thing.

tbf that would be a fucking great book https://t.co/PmPpPLAguT