You might already have seen seven-time Super Bowl champion Tom Brady’s joke at the expense of Donald Trump and those election fraud claims when he visited Joe Biden at the White House this week.

Super Bowl winners were conspicuous by their absence at the White House during Donald Trump’s time in charge, but Brady and the rest of the Tampa Bay Buccaneers turned up to say hello to Joe Biden and this rather fabulous moment happened.

Brady: Not a lot of people think we could’ve won. In fact, I think about 40% of the people still don’t think we won
Biden: I understand that pic.twitter.com/0yNlu3d3Cn

Brady’s a long-time friend of Donald Trump – they used to play golf together – and it’s fair to say people loved it, they really loved it.

Really no deeper cut for Trump than Brady saying it. https://t.co/k5liWY4mjd

Say what you will about Tom Brady, but seeing him at The White House celebrating his Super Bowl win, joking with Joe Biden about 40% of people not thinking that they won, and him being ‘Sleepy Tom’ must be driving Trump ABSOLUTELY NUTS.pic.twitter.com/2tmLcjzTis

But the best response was surely the rightwing fury it prompted.

And it was nowhere better captured than the meltdown suffered by rightwing news site, Breitbart (where @joelpollak is editor at large)

😆Breitbart is having a total meltdown over Tom Brady’s joke with Biden about Trump losing the election pic.twitter.com/dfhEEgSnDN

And those headlines in full … 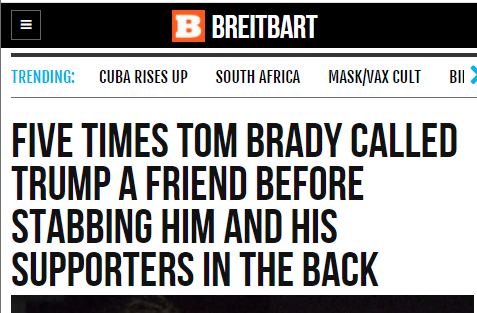 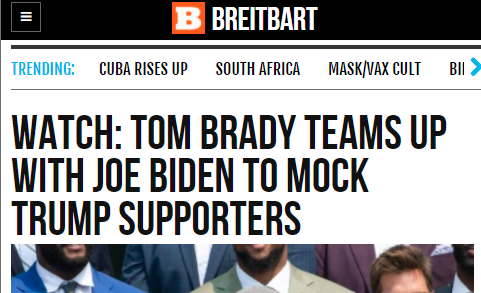 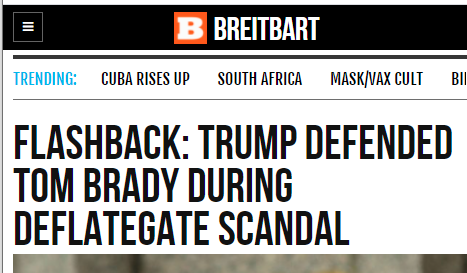 What a wonderful day for a rollercaster ride – oh!