In another, less hasty, u-turn than the one which saw Boris Johnson and Rishi Sunak decide to self-isolate rather than take part in a pilot scheme to let them continue working after contact with an infected person, the PM has announced that vaccine passports will become compulsory.

"Proof of a negative test will no longer be enough"

UK PM Boris Johnson says that after all over-18s have had the chance to get both Covid jabs, full vaccination will be required for entry into "nightclubs and other venues where large crowds gather"https://t.co/EZJkjkCXF1 pic.twitter.com/q0UpIP3Hmr 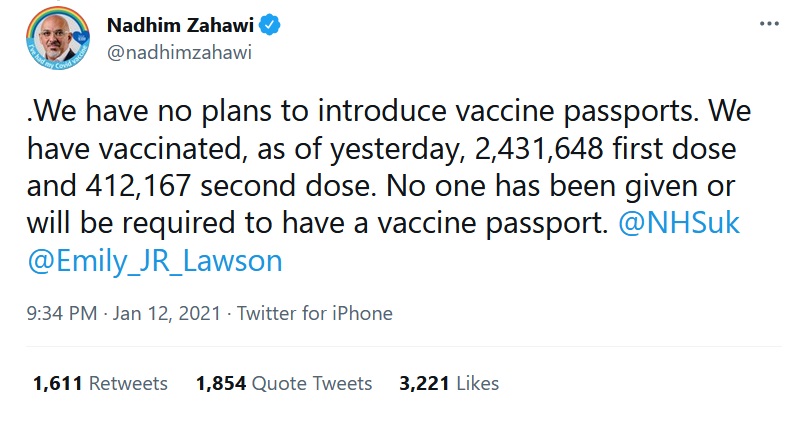 With only 35 per cent of 18 to 30-year-olds having taken up the opportunity to have even a first vaccination, the move has been described as coercion by those against the jab, making it a hill upon which some are quite literally prepared to die.

But…. When will people wake up and see this for what it is? Totalitarian and control pic.twitter.com/44QQp9tPFo

The irony of the announcement being made on ‘Freedom Day’, mere hours after scenes of packed nightclubs had hit the headlines, was not lost on anyone.

Nightclubs: both so dangerous you’ll need to be double vaccinated and fine to go in for two months with or without 1-2 vaccines

So let me get this straight – nightclubs aren’t any sort of problem until *looks over glasses* September?

Given that I’m double jabbed, I can 100% go to a nightclub

Chances of me actually going to a nightclub are 0%

What did Father Covid bring you for Freedom Day? 28+ great responses to the new rules

This guy’s Tinder profile starts badly and gets worse, so much worse (NSFW)