It recently ran into an unexpected controversy, when presenter Guto Harri shared his respect for the principle of taking the knee against racism – and did it live on air, causing a rash of furious tweets from viewers.

This is what caused the outrage.

“Those people” are upset and threatening to quit watching their fave anti-woke channel, gbnews because presenter Guto Harri took the knee in 45 second segment. Imagine wanting to be fed hate 24/7.

GB News deleted their link to the clip, and posted this three-tweet statement. 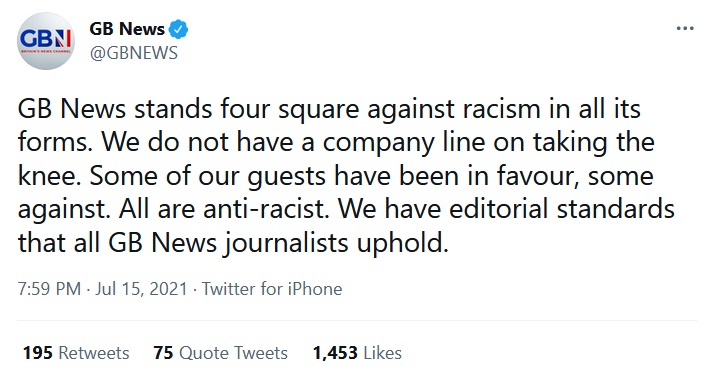 They didn’t clarify whether Harri still has a job there.

GB News spokesperson unable to say if Guto Harri, the former Boris Johnson spokesperson who took the knee on air in solidarity with England football team, is still going to have a job following backlash from furious viewers who feel channel has gone woke. https://t.co/Vbf0wJ7p46

These reactions have it covered.

So you can literally praise Nazis on media outlets that @afneil chairs without breaching 'standards'. But you can't take a knee. Wow. https://t.co/zw9hm9xUFx

No one was watching, don't worry about it https://t.co/gWu6tLWO56

And we go live to the free speech channel… https://t.co/Hq1ylDcvBg

Wondering if in between these two tweets the GB News feed person had some kind of funny turn. pic.twitter.com/OkqS9xBzW4

You need to specify what standards exactly were breached here, GB News.

Give us chapter and verse from your standards guidelines, pls.

You haven’t done so here. It looks like you just don’t like free speech when it doesn’t go your way.

Anti-racism gestures made in solidarity with an abused English national football team are an unacceptable breach of GB News standards, got it.

Sun Apologies made this point.

In fairness, anyone who's seen GB News will be shocked to know it had standards to breach. https://t.co/CGSSFl1eDA

17 funniest jokes about the first week of GB News