In ‘Another Brexit bonus‘ news, the Transport Secretary, Grant Shapps, has announced plans to deal wth the shortage of HGV drivers. 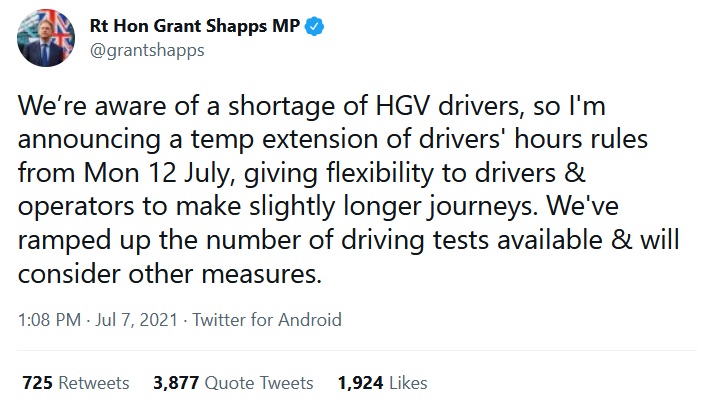 For ‘temporary extension of drivers’ hours rules’, read ‘We’re letting them loose with a lorry and no sleep. What could go wrong?’.

People weren’t surprised – and they weren’t impressed, either.

We're aware that Brexit hasn't worked out as we'd like, so I'm announcing that much, much tireder drivers will now be in charge of seven ton blocks of metal travelling amongst humans at 60 miles an hour. https://t.co/ynFtSPk6wE

There is a shortage of drivers so let’s let the few that are left drive into each other with exhaustion UNTIL THERE IS ONLY ONE LORRY KING! AND THEY SHALL NEVER SLEEP AND SERVE US ALL! https://t.co/TePFFkl1VO

The minister for transport there solving a transport problem by setting knackered lorry drivers loose on busy motorways https://t.co/oOP4IhLABR

SHUT UP GRANT, WITH YOUR PROJECT FEAR!

The government telling Lorry drivers to drive tired through our streets can only make us all safer!

How it started How it's going pic.twitter.com/X0bcnkChex

I can confirm the relaxation of HGV driving rules to cope with the Brexit shortage will include free MDMA rations at all Welcome Break and MOTO service stations. https://t.co/OMnDvipllN pic.twitter.com/tuqLBOutfx

If only someone could work out what happened to all the HGV drivers.

I can't understand why there is a shortage of foreign HGV drivers after we spent five years telling them to fuck off back home. https://t.co/tnvGWLLFlU