Rarely can such a brilliant story have been told with so few words, a fabulous tale of a cat that was lost and then found, and then found again, which has just gone viral all over again on Reddit. 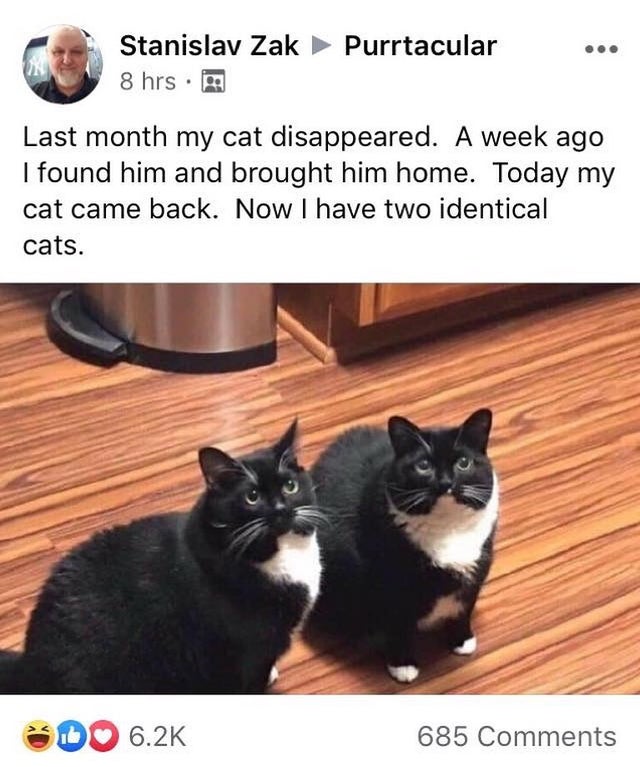 It prompted lots of wonderful replies, of which these are our favourites (beginning with the best).

‘A few years back, my mother was driving by and called me at work claiming my and my wife’s cat was dead on the road outside our rural home.

‘My mom started digging a grave in the pet cemetery by our shed as I called the wife. My wife wanted to say goodbye so I called my mom back to tell her not to cover old Diablo up just as she screams into the phone.

‘The dead cat on the road was a perfect doppelgänger for Diablo and little bastard showed up for his own funeral.’
Tragic-Courage

‘Always two, there are. No more. No less. A Master and an apprentice.’
kune71

‘That stupid f-cking look on their faces. God I love cats.’
NoMeansNoBillCosby_

‘This dumb human doesnt know which of us is real, doesnt he?’ disappointed look 😂’
MuslimByName

‘I’ve legit had nightmares about not being able to find my pets among many identical animals. I don’t like this.’
Jimmyvana

‘Both cat’s look as confused as him 😂’
Longjumping_Zebra_23

‘How rare is your body?’ 20 interesting and occasionally very unusual things that you may – or may not – have