Tennis Champion Naomi Osaka has taken the admirable decision to withdraw from the French Open after organisers threatened to expel her over her refusal to take part in news conferences.

Both moves were intended to protect her mental health, which she addressed on social media.

Here’s that second statement in an easier-to-read format.

This isn’t a situation I ever imagined or intended when I posted a few days ago. I think now the best thing for the tournament, the other players and my wellbeing is that I withdraw so that everyone can get back to focusing on the tennis going on in Paris.

I never wanted to be a distraction and I accept my timing was not ideal and my message could have been clearer. More importantly, I would never trivialise mental health or use the term lightly.

The truth is I have suffered long bouts of depression since the US Open in 2018 and I have had a really hard time coping with that.

Anyone that knows me knows I am introverted and anyone that has seen me at tournaments will notice that I’m often wearing headphones as that helps dull my social anxiety.

Though the tennis press has always been kind to me (and I want to apologise to all the cool journalists who I may have hurt), I am not a natural public speaker and get huge waves of anxiety before I speak to the world’s media.

I get really nervous and find it stressful to always try to engage and give you the best answers I can.

So here in Paris I was already feeling vulnerable and anxious, so I thought it was better to exercise self-care and skip the press conferences. I announced it preemptively because I do feel like the rules are quite outdated in parts and I wanted to highlight that.

I’m going to take some time away from the court now, but when the time is right I really want to work with the Tour to discuss ways we can make things better for the players, press and fans.

Although some people criticised Naomi, accusing her of putting herself first – as though that were a bad thing when it comes to health – many more admired her courage and good sense at taking such a huge step.

Proud of you, @naomiosaka. https://t.co/ReCg1K33oA

I’ve not been on socials today. Just looking at some of the grim darts being fired at Naomi Osaka.

If someone says they are struggling with their mental health then surely our first reaction should be to listen rather than judge?

Let’s boycott the French open. Naomi is the most exciting player anyway. Imagine punishing someone for having anxiety… in 2021.

One person who was less than sympathetic, however, was that champion of women’s rights and mental health – Piers Morgan. 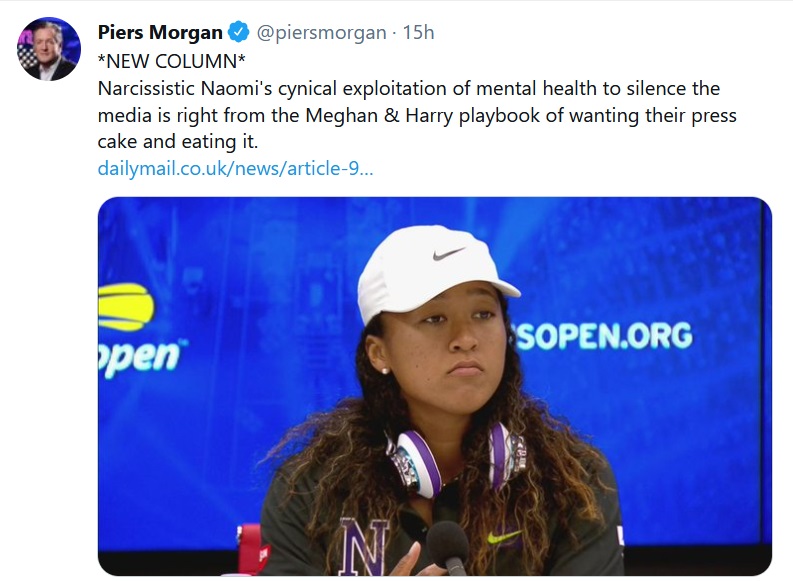 Of course, he mentioned Meghan and Harry. Of course he did. People weren’t impressed.

This Guardian letter wins our ‘Subtle Burn of the Week’ award