Now that Donald Trump isn’t on Twitter or Facebook, he issues ‘statements from the desk of Donald J Trump’ in the hope that other people will share them and they’ll go viral.

Now ordinarily we wouldn’t bother you with what he has to say (well, not too much) but – even for him – this one was off the scale.

It’s what he had to say about the Kentucky Derby-winning horse, Medina Spirit, after it failed a post-race drug test this week. 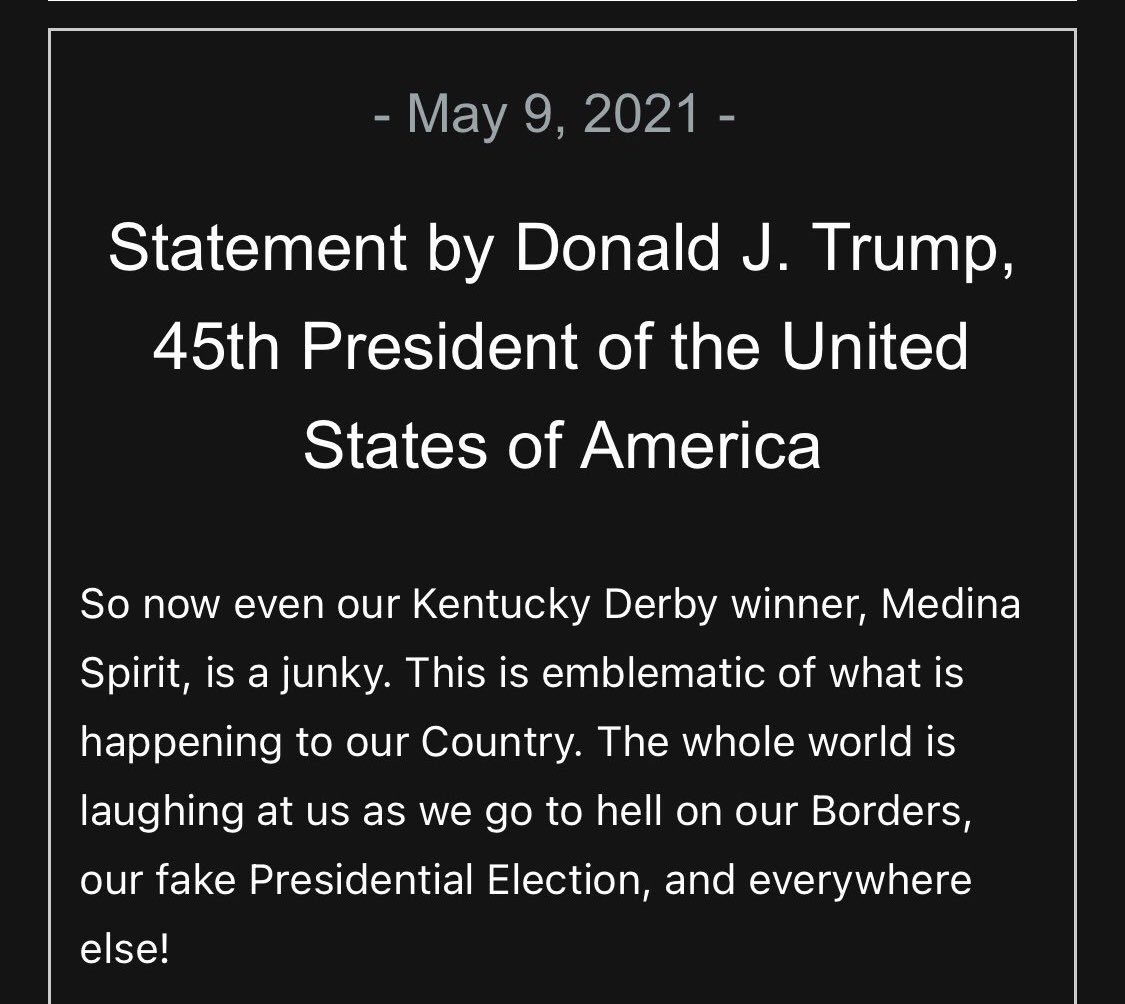 It was shared by journalist Aaron Rupar, or @atrupar on Twitter …

Is he … is he aware that Medina Spirit is a horse? pic.twitter.com/K5SImeNgpL

… and prompted no end of mockery as you might imagine. Here are our 9 favourite responses.

He's not a stable genius https://t.co/s1svFXFnWJ

“Just the other day Seabiscuit said to me, ‘Sir, Sir, when you were President, my 401K was up 80,000%, I had all the Hay I could eat, and Horses weren’t on DRUGS! Now everything is RIGGED! Also, you have Very Big Hands.’ Seabiscuit let out a big Neigh and then started crying.”

“When it comes to a drug test, I’d go hoof-to-lift with that wheezing gasbag of pharmacological gluttony. At least when I take drugs, it helps me move quickly instead of just talk stupidly.”

The entire Republican Party is a cult around…a man who thinks a horse is a junky because Joe Biden. https://t.co/HZyFtmSbPr

What if, hear me out here- but what if junky Medina Spirit ends up on the street in Sedona, Arizona?
What if Caitlyn Jenner’s hangar friend is forced to see the homeless junky horse… what is this world even coming to??
It’s all Joe Biden’s fault.
I know because I saw it on tv.

Who else is fighting the problem of horse junkies like the former guy? This is what real leadership looks like.

I know it wasn’t that long ago but sometimes I see quotes from Trump and think “holy shit this guy was actually president.” https://t.co/uBiDCEdv0m

You gotta stop sharing this man’s words on here bro

I hardly ever acknowledge his existence these days but I thought the insanity of this statement was worth sharing. I’m aware of the concerns about tweeting for him

This job interview started with the receptionist and people loved it