A late contender for takedown of the week comes this.

He can also be a very entertaining read and his response to this Mars sceptic who couldn’t see the point of exploring the red planet is a classic case in point.

‘This is why I love Neil,’ said Eleonora2186 who shared it over on Reddit. 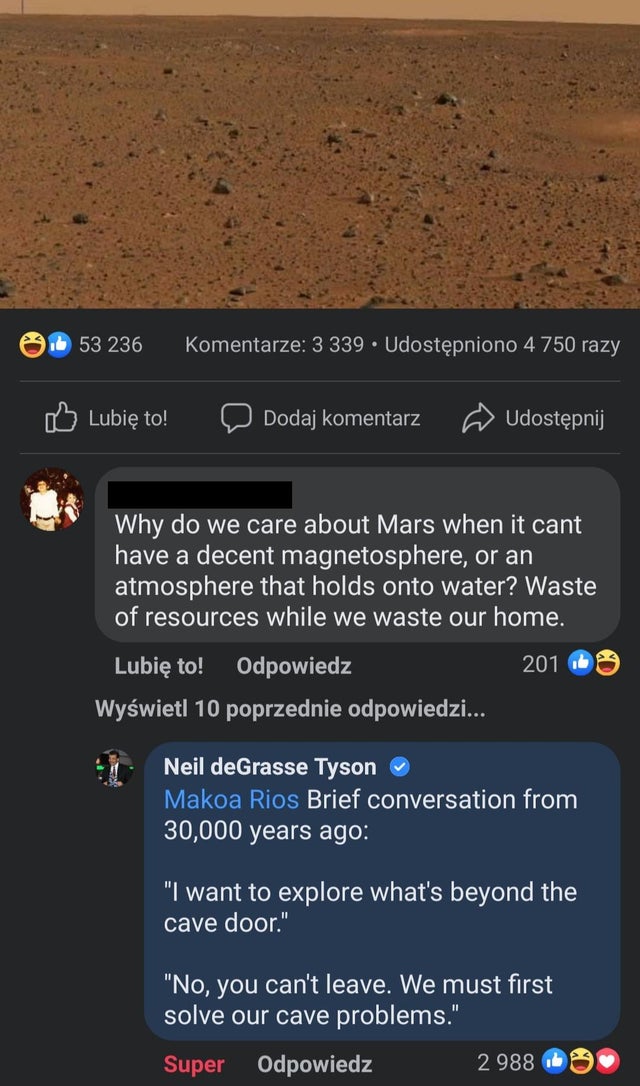 They were last spotted tumbling out of control somewhere near the Kuiper Belt.

But not everyone agreed with the response and this person took some time to say why. Here’s a bit of what they had to say.

‘This is the opposite of a murder. The first guy brings up a solid point that, for many people, can seem incredibly frustrating to focus on. First of all, it would be incredibly hard to build a human habitation there in comparison to, say, Venus for a variety of reasons. Now, it’s not like we’ll be getting to either planet soon, but there is so much more to a planet’s habitability than just “it’s our sister planet.”

‘But, beyond all the technical stuff, and realizing that the money going into NASA and space programs isn’t taking away from anything else, it can be a real frustration to people to see so much hype about a crazy billionaire sending his car to the sun, when we can’t even figure out our life here in earth. We have problems here. We have life here. We have things we need here. It can feel so dumb to be pining after a planet that would be actively hostile to life when we cannot even take care of out own planet.

‘I don’t blame the guy for saying this when we’re,in the middle of a pandemic that plenty of assholes haven’t taken seriously, we came out of a terrible presidency (for those in the US), global warming is getting worse, the economy is hurting as a result of measures taken to address the pandemic, etc.

‘And Neil isn’t exactly doing anything here to address what, to me, sounds like very real concerns regarding why governments and nations can get so hyped up about a rock that would actively try to kill us when we can’t even take care of the rock that tries to nurture us.’
CCtenor