It’s fair to say it’s not been a great day for Boris Johnson.

First the Electoral Commission announced an investigation into how the prime minister funded refurbishments to his Downing Street flat, saying there were “reasonable grounds” to suspect multiple offences may have been committed.

Then Johnson got rattled – very rattled – under questioning by leader of the opposition, Keir Starmer, prompting the Labour leader’s team to dub it his ‘Kevin Keegan moment’.

"Mention the wallpaper one more time and I'll put you at the top of the pile of bodies" pic.twitter.com/h7UIpZRuP1

This was Keir Starmer's face during Boris Johnson's 1m54s angry tirade at the end of their exchange at #PMQs pic.twitter.com/xbJzqiQzds

And then John Lewis got in on the act.

You might remember it was reported that Johnson and his partner Carrie Symonds refurbished their Downing Stret home because they wanted to transform it from “Theresa May’s John Lewis furniture nightmare into a high-society haven”.

It struck some people as curious at the time.

Can’t quite get my head around Carrie Symonds reportedly looking down on ‘John Lewis furniture’. I think we had our wedding list there. For all but the tiniest section of the population, John Lewis is posh.

And today the department store wasn’t taking it lying down and went viral on Twitter after it did this. 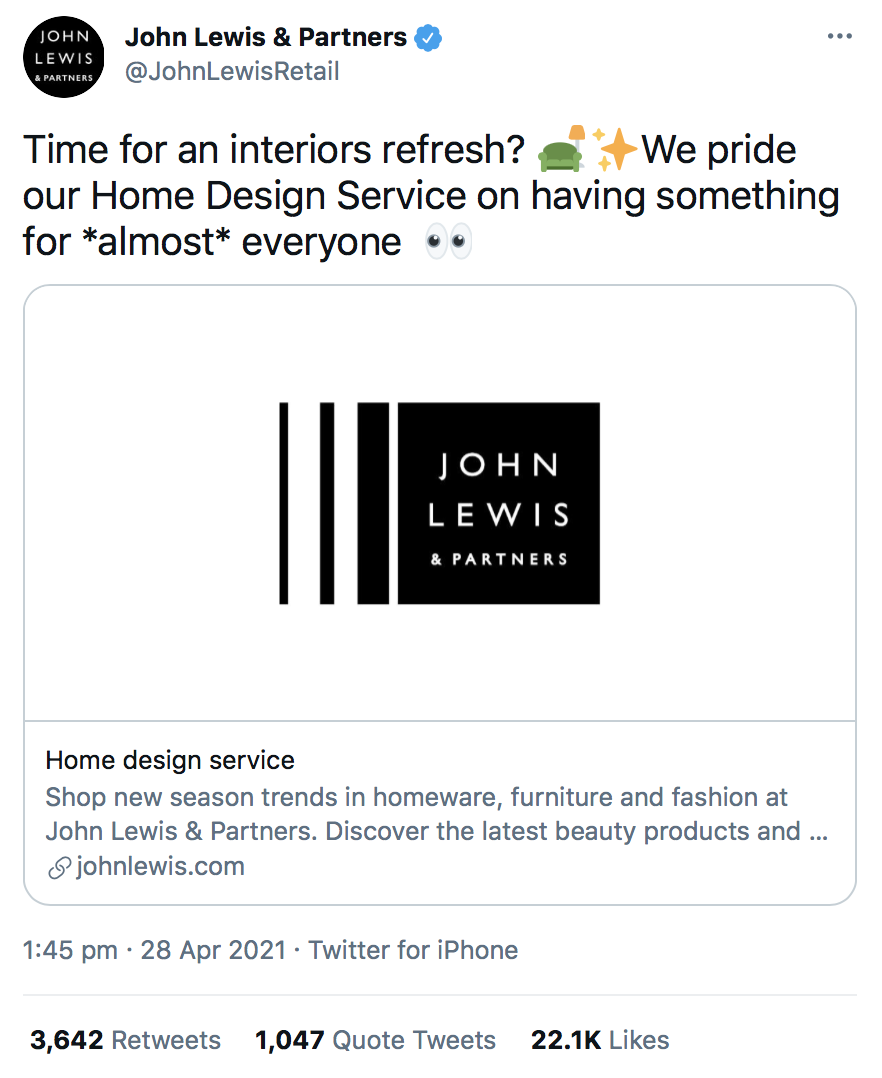 Nicely done (and not the first time they’ve alluded to the saga).

Phew, the John Lewis social team have just finished an all day brainstorming session to find ways for people to talk about us on Twitter….. Have we missed anything? 👀

The session was obviously a productive one.

Johnson and Symonds can’t stand it, I can’t think of a higher recommendation.

The PM is now being trolled by John Lewis. #CashforCushions https://t.co/4ouoGgMWRB

Do you sell large fridges? Big enough for – say – an adult human to hide in?

Give that social media manager a pay rise immediately https://t.co/aWWiDdhOxe

Was giving something like this some thought… could you guys help, I’ve only got a £88K budget? pic.twitter.com/NB1i1QNiXH