To the world of the flat earthers, now, where one of their number had a question about Nasa’s awe-inspiring Mars rover, presumably because they don’t believe it exists (or, at least, isn’t on Mars).

And the takedown went viral on Reddit because it’s rocket propelled. 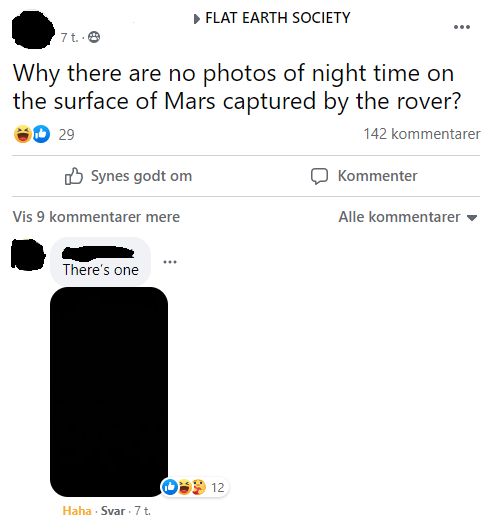 ‘Why are flat earthers concerned with Mars?’ Britannkic_

‘Flat earth almost requires the moon landing, satellites and space stations to be fake, their orbits and fotos of earth are photoshopped and created to deceive the masses. If space travel is fake, then so must be space travel to Mars. Also, in some flavors of flat earth stars and planets are just lights, whatever that means. So no matter there you could drive your rover on.’ RedArcliteTank

‘I expected something along the lines of “They believe all planets are flat”, not legit thinking that outer space doesn’t exist. That’s a whole new level of whack.’ Metrack14

‘I don’t know why, but I’ve recently gone down the flat earth rabbit hole and it’s been an excruciating journey through some of the most idiotic, brain dead nonsense I’ve ever subjected myself to. So this…this hits different now. This made me laugh harder than it probably should have.’ MonkCherry