It can be irritating – very irritating – when someone leaves you a note rather than saying something to your face.

And we’re not entirely sure why, but it can be even more infuriating when that note is left on your car.

We only say this because this angry car parking note – and the pitch perfect response – has just gone viral on Reddit.

‘Found an angry note on my car today. I replied,’ said Redditor superhove. 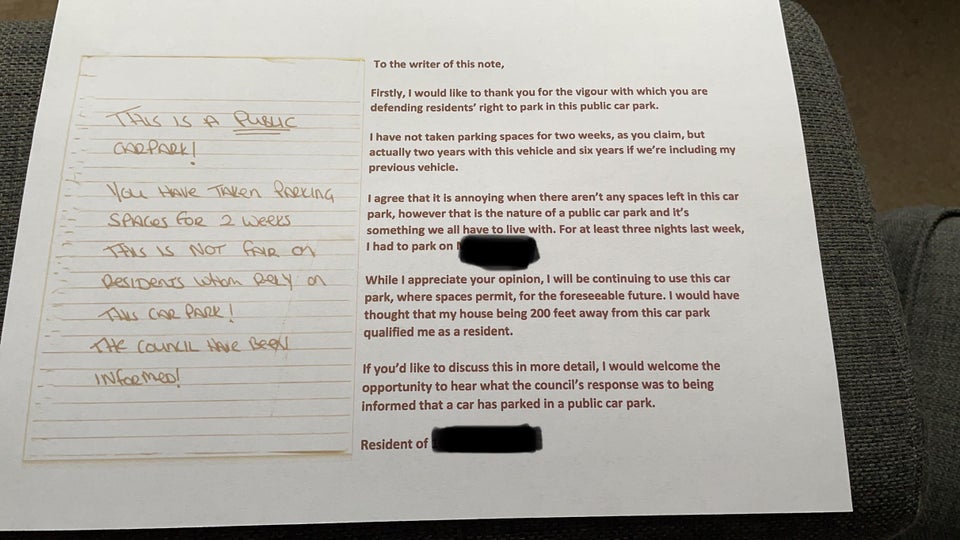 And just in case that’s tricky to read, here’s the original.

“This is a public car park. You have taken parking spaces for two weeks.

“This is not fair on residents whom rely on this car park. The council have been informed!”

And the winning reply.

“To the writer of this note, firstly, I would like to thank you for the vigour with which you are defending residents’ right to park in this public car park.

“I have not taken parking spaces for two weeks, as you claim, but actually two years with this vehicle and six years if we’re including my previous vehicle.”

“I agree that it is annoying when there aren’t any spaces left in this car park, however that is the nature of a public car park and it’s something we all have to live with.

“For at least three nights last week I had to park on [road name].

“While I appreciate your opinion, I will be continuing to use this car park, where spaces permit, for the foreseeable future.

“I would have thought that my house being 200ft away from this car park qualified me as a resident.

“If you’d like to discuss this in more detail, I would welcome the opportunity to hear what the council’s response was to being informed that a car has parked in a public car park.”

Boom. And just a few of the responses it prompted on Reddit.

‘This is a local car park for local people, we’ll have no trouble here.’ Ethelredthedestroyer

“This is a PUBLIC car park, therefore only certain people are allowed to use it.” Reminds me of the time someone left a note on my flatmates car, adamant that the parking was residents only and that he should use the public car park two streets down… Except the car park two streets down is actually private, it’s not residents only parking, and well, even if it was he bloody lives there. Lived there like 3 years at this point with the same car.’ IAM_THE_LIZARD_QUEEN

‘Can’t be doing with folk who get this precious about car parking spaces they don’t own. Nobody has a divine right to use any car parking space that isn’t specifically theirs, even the space outside their house. If somebody parks outside my house I park two meters down the road, it’s as much my bit of road as it is someone else’s. You snooze you lose, just put that in the highway code.’ DuvetCapeMan

“whom rely” … Find them and kneecap them.’ SquireBev

The crushing takedown of this Fox presenter is supremely satisfying

17 ‘luxury’ items that are really expensive but also laughably ridiculous