The BBC is often criticised for not reporting on enough matters of public interest – particularly those showing the government in a poor light. Some of those criticisms are justified, and others aren’t.

However, it seems they’ve managed to go too far in the other direction with this report on Hugh Grant. 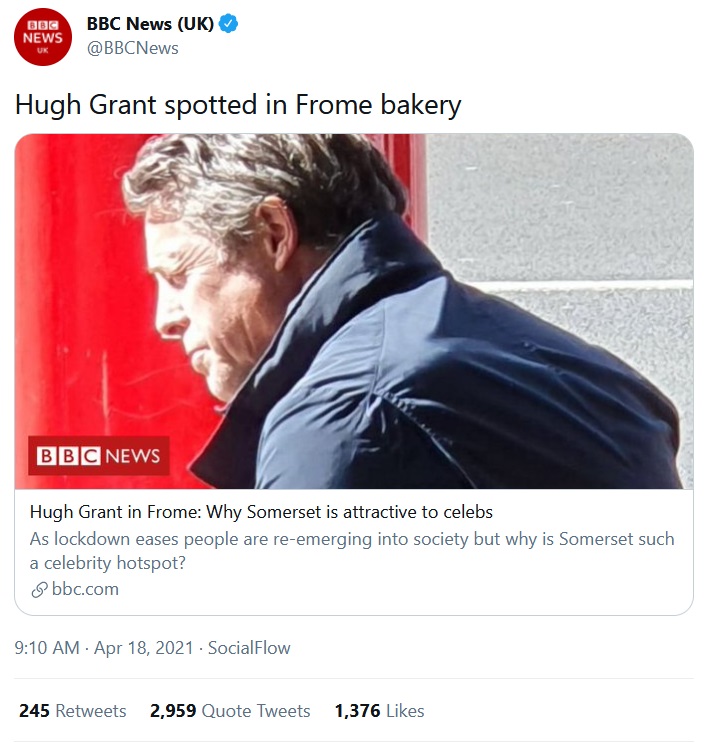 It’s good to know that there’s so little happening in the world that the shopping habits of actors are now newsworthy.

Twitter couldn’t resist having its say, and these tweets cover the range of reactions in the most brutally entertaining way.

They're writing like he's Jason Bourne or something??? https://t.co/OOHR9DNola pic.twitter.com/qNNtev5W6O

I'm an experienced journalist but always keen to learn new skills and improve my 'news sense'.

Please share with me what the news angle is here.

Is it that Hugh Grant is in Frome or that he likes a croissant for breakfast at the weekend?

Did I miss something big? Is this part of some sort of manhunt? https://t.co/3mR35Ar25f

I’m so confused by this headline. It’s written as though Hugh Grant is a Bigfoot/unicorn or other mythical creature, presumably to avoid printing ‘Man Eats Bread’…. https://t.co/NKRcY6Bp1Z

Hugh Grant visits Bakery is not news. Unless of course he was handed the government backed bakery by David Cameron, Rishi Sunak or Matt Hancock. https://t.co/wArrdHDv5d

In other news, Angelina Jolie was spotted breathing air, just like an actual human being https://t.co/o9qJ7qE0W5

Somerset residents, Hugh Grant is in your vicinity and he has a custard slice, I repeat, a custard slice.
This is not a drill
😂 https://t.co/6DdP1cSpOU

If you spot Hugh Grant in YOUR bakery be sure to make a note of what he buys, because apparently this is vital news according to the BBC https://t.co/aR1Q7MqZiv

Anyone know where in the country Hugh Grant is, what type of foodstuffs he's buying and….. oh, don't worry, BBC News has sorted it. https://t.co/gxdKXaOvt0

Mother of god, Hugh Grant was in Frome… pic.twitter.com/ry6c8yX9uC

Tory corruption.
Brexit chaos.
Highest Covid death rate in Europe.
BBC: No idea what you're on about

Hugh Bonneville stepped back into his W1A character to react to the ‘news’.

⁦@Jason__Watkins⁩ Sorry to interrupt your Nordic Walking weekend but could you ask Tim exactly who is driving the News desk this weekend? I’m getting an engaged signal and someone’s put a broom across the door handles from the inside #W1A https://t.co/obFSq0ywmt

Yes no now this isn’t funny.Tim is himself driving @BBCNews from his office.Desperate not to be controversial-or political,he’s banging out stories of celebs being spotted around the country.Just stopped him putting one out,about a women coming out of her own house in Hounslow.

Finally, author Nick Pettigrew signalled what might have been.

The headline 'Frome With A Hugh' was right there and you blew it. https://t.co/yGqEpYG2tM

Such a missed opportunity. They should lead with it on the News At Ten.