Road Runner was a big part of our childhoods, not only because we only had three channels to choose from, but because it was so, so good.

These 9 rules drawn up back in the day by the great Chuck Jones and his team governed every single interaction between Wile E Coyote and the Road Runner.

It’s just gone viral on Reddit because it’s such an interesting little read.

‘Looney Tunes’ guide to dictate all interactions between Wile E. Coyote & Road Runner. Developed by Chuck Jones and his team,’ said Redditor TheEternels who posted it. 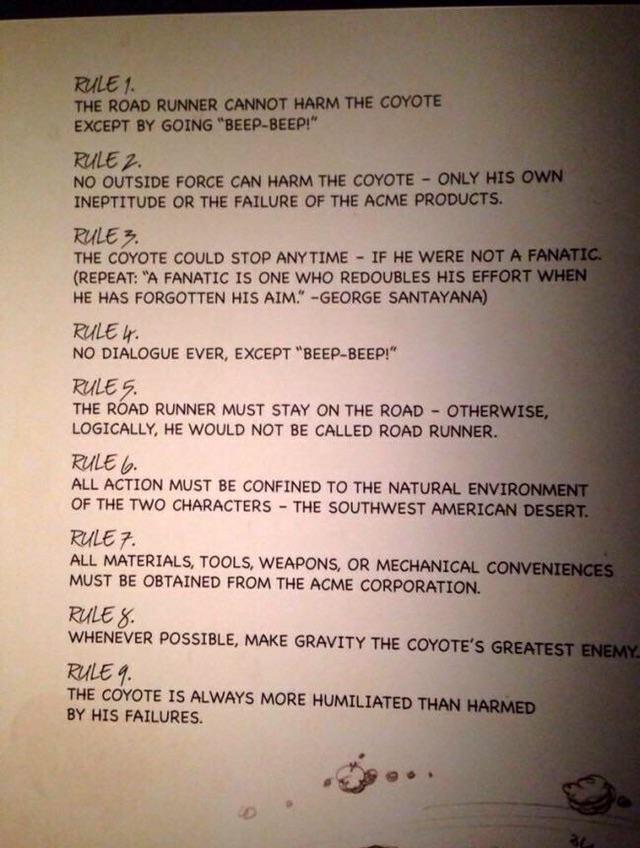 And our favourite things people said about them.

‘Rule 9 is kinda brutal if you think about it. He’s blown himself up millions of times but he’s more humiliated than he is hurt ._.’ aIwaysinpain

‘He can walk away from failure yet never escape it.’ T438

‘I feel like god has a similar set of rules for me.’ jskylok

‘ACME: A Company Making Everything.’ primavera31

‘So that is what I actually thought it meant, but back in the day you would find actual companies of all sorts going by the name Acme. “Acme” is actually a word that has fallen out of popularity but it meant “the pinnacle”, “climax”, or “peak of perfection.” Which only adds another level of irony as many of the ACME products used in the cartoon are far from perfection.’ rapidpop