Having a bad day? At least you haven’t wedged a container ship across the Suez Canal

A lot of people’s Tuesdays took a turn for the worse when an almost 220,000 tonne container ship somehow became wedged in the Suez Canal.

The resulting traffic jam makes bank holiday weekend on the M25 look like a short queue for the self-checkout in Asda.

So, the #SuezCanal is blocked…

Massive container ship EVER GIVEN stuck in the most awkward way possible.

Ongoing for hours. Every tug Egypt could spare appear to be trying to pull it free.

The vesselfinder website shows the ship’s current location at exactly the same point as it was in last night, with this helpful additional info.

As one of the world’s busiest shipping lanes, the Suez Canal’s current inaction is costing millions of pounds per hour to the many companies with cargo twiddling its metaphorical thumbs either side of the trapped ship.

We can only assume it asked Brexit to hold its beer.

If you think youre having a bad day, spare a thought for the helmsman who somehow managed to stick his giantass ship sideways into the goddamn Suez Canal & blocked it into literal gridlock & is currently costing every seafaring nation of Earth like millions of dollars every hour pic.twitter.com/DIWAxwctXa

Over on Instagram, Julianne Cona on the Maersk Denver shared the view from behind the EVER GIVEN. 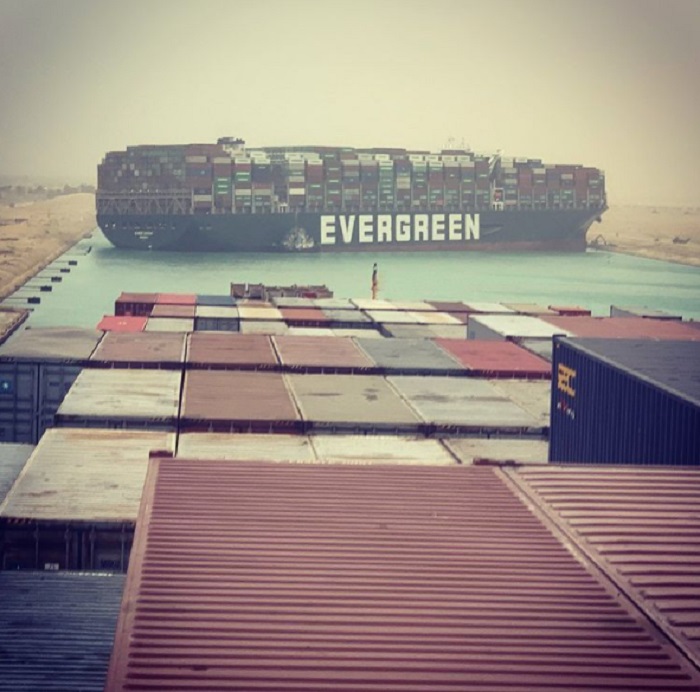 If only someone could have predicted that the ship might not be suitable for navigating the canal. If only …

My favorite detail about this story is that this ship is the size *above* the class of container ship known as "Suezmax," which is called that because it's the biggest type of ship that's supposed to use the Suez Canal https://t.co/40aFSSEcj2

Someone took an excavator to try and clear the blockage, in much the same way as you might try to empty a bath using an egg cup.

Latest update: the EVER GIVEN is… still ever-jammed across the #SuezCanal.

Twitter couldn’t look away, and these reactions tickled us.

Just going to bulk buy this book and go to the Suez canal to sell them pic.twitter.com/gBi5Df0nPr

Omg the Suez Canal is totally blocked. All the water will have to go around the long way.

Any newspaper people writing up the Suez Canal blockage for the morning's editions, you can have Dire Straits as a headline on me

The Suez Canal is completely blocked, between junctions 5 and 6 at Clacket Lane Services

Pretty pleased with my first day as lock keeper on the Suez Canal.

Attempting a 3 point turn was a big mistake https://t.co/duvfTjheoV

Whatever you did today, whatever your shortcomings… you did not block the Suez Canal* with your gigantic boat.

*Unless of course, you're the captain of Ever Given. In which case, well– things happen.

One tweeter spotted a solution.

If I was piloting one of those ships waiting in the Suez Canal I would simply squeeze through that gap pic.twitter.com/1jB1IF5KNd