A round of applause for the Seaside Brewery in Oregon which went viral with its policy for people who refuse to wear masks. 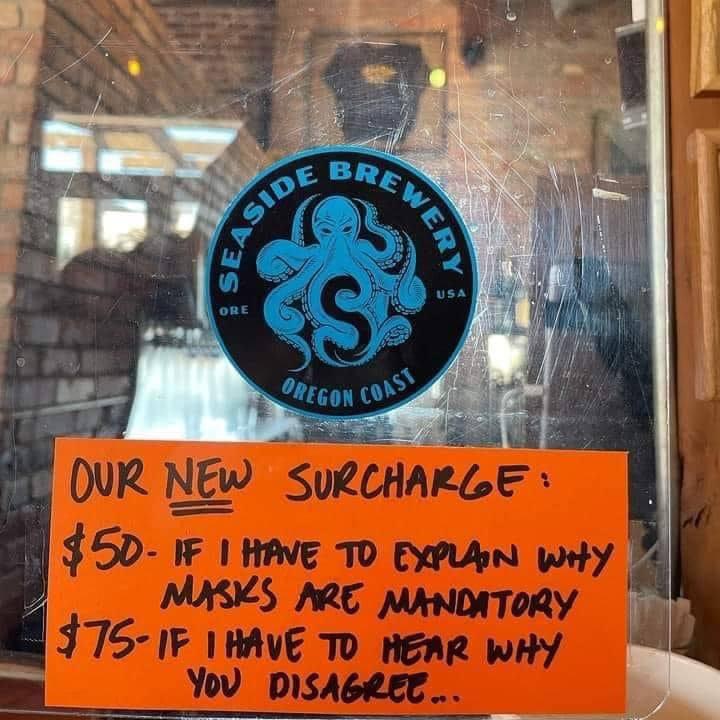 ‘$200 surcharge if I’m forced to call police to remove u :/’ BunnyBunnyBunnyBoy

‘I’d love this at my job. The last customer who challenged me with “ I don’t see the point “ got told bluntly by me that it’s the rules. I’m no longer interested in debating anything with them. And yes of course he approached me when I was with my boss afterwards to complain how I spoke to him. I told him “ it’s been a year”. Luckily my boss never joined in. Because he’s as sick of it too.’ Skinnybet

‘One of the things I hate most is how much more complicated my job is now. In the beforefore time as long as you did your job, I don’t care that you browse Info Wars in your down time. There’s no reason we need to talk about politics or anything, nothing to do with the job. Ever since mask wearing has been politicized it’s been a nightmare.’ The2500

‘If Trump had made masks with his name printed on them or MAGA from the get go, his moron minions would have scooped them up and worn them even to bed. Making masks a political issue was his doing entirely.’ NWBoomer

‘Yep. I wear a mask all day (6:45 to 4 pm, later when coaching the cross country team). It’s annoying, but if I’m saving one kid, one parent or grandparent… it’s 100% worth it. It’s like going to a construction site without a hard hat and steel toed boots, a firefighter going into a burning house without fire gear. It’s what we have to do.’ AntaresBounder