‘How will you spend St Patrick’s Day?’ This hilarious answer is the only response you need

St Patrick’s Day has sent this old Q&A viral all over again and we’re very glad it did because it’s brilliant.

It was shared on Twitter by journalist Martin Doyle, a memory from 1996 when he was tasked with asking author Brian Behan and comedian Kevin McAleer how they would be spending the big day.

And Kevin McAleer’s answer – you might also know him as boring Uncle Colm in Derry Girls – is simply fantastic.

So I asked Kevin McAleer and Brian Behan in 96 what St Patrick’s Day meant to them Kevin’s answer still cracks me up pic.twitter.com/i2xggU1z6J

Here it is again, just in case that’s tricky to read. 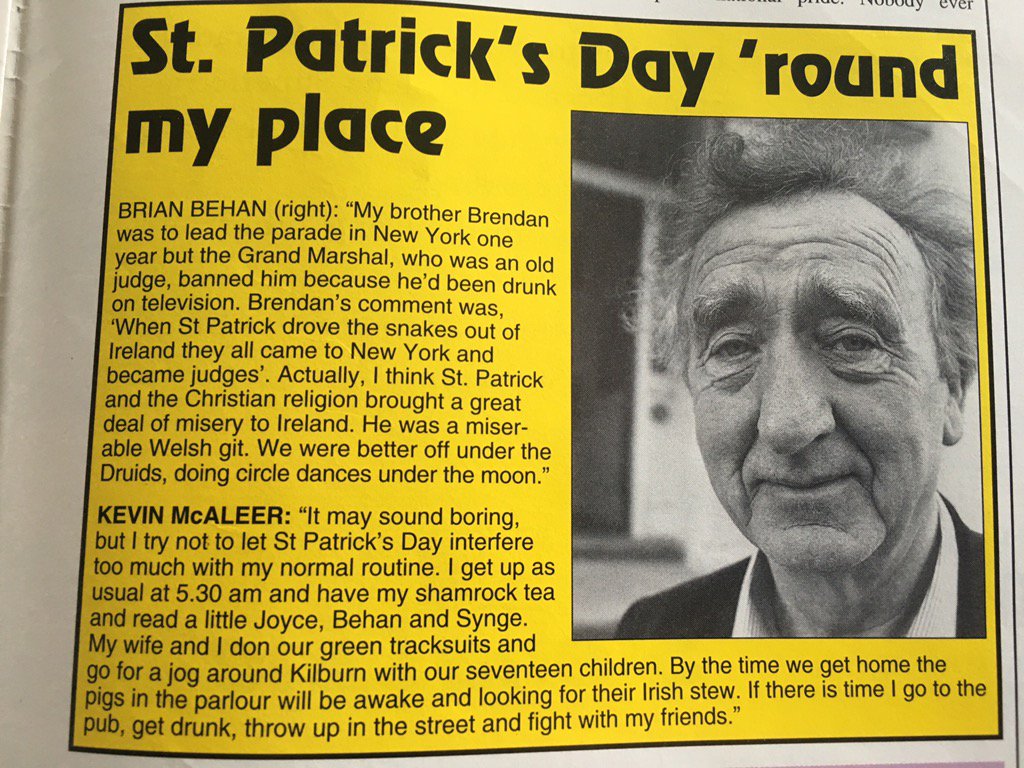 ‘It may sound boring, but I try not to let St Patrick’s Day interfere too much with my normal routine.

‘I get up as usual at 5.30am and have my shamrock tea and read a little Joyce, Behan and Synge. My wife and I don our green tracksuits and go for a jog around Kilburn with our seventeen children.

‘By the time we get home the pigs in the parlour will be awake and looking for the Irish stew. If there is time I go to the pub, get drunk, throw up in the street and fight with my friends.’

And there’s lots more Kevin McAleer courtesy of this thread by @MartinDoyleIT.

Kevin McAleer, Tyrone Calling: “Of course, in these parts they used to drink ether, which is a mixture of alcohol and wind. A pint of ether, a smidgen of the Irish language and a dollop of magic mushrooms on your chips and you were ready to engage Elizabeth’s army in some bog” https://t.co/eRKZWAUXuD pic.twitter.com/AFHDlh5LWw

So a year later I asked Michael Redmond how he celebrated St Patrick’s Day pic.twitter.com/nlXaG05F81

This comparison of Donald Trump and Joe Biden talking Covid, one year apart, is an extraordinary watch