It’s still early but leading contender for poster of the week is this one.

It’s an appeal for information about a missing Roomba, shared by CheeseBugLag over on Reddit, that really does go the extra mile to raise a smile. 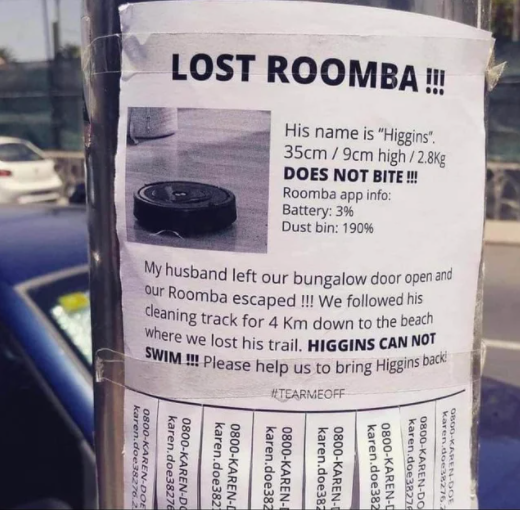 ‘Higgins’ is also the best name for a Roomba. Possibly for anything.

‘Good one. We call ours Dustin.’ SniffCheck

‘We named ours J. Edgar because he’s a Hoover looking for dirt.’ pudinnhead

And it prompted this gag which is an old one but a very, very good one.

‘Unfortunately he won’t survive in the wild. Nature abhors a vacuum.’ badfan

Don’t read this if you don’t like downbeat endings though.

‘Higgins was probably caught, factory reset under the lid and renamed with a new dock. I’ll guess in a pawn shop or in a new home under a new alias.’ c0mad0r

The one where the F.R.I.E.N.D.S theme calls out the government for cronyism