Despite the fact that Hasbro has now clarified that Mr and Mrs Potato Head will still be available, some people are just not going to let it lie. This guy from the Christian Broadcasting Network, for example.

As a man who believes in Adam and Eve, he’s presumably on board with unsolicited ribbing – which is what he got.

And lo, on the eighth day God did create Mr Potato Head, and he looked down on his creation and was satisfied, for he had a truly gargantuan peen

ADAM AND EVE NOT TURNIPS AND SWEDES

If you think the Bible is telling you that a fake plastic potato has a penis, I think you should seek some psychological help. Quickly. https://t.co/m40zRw6jtG

Is that the book with the talking snake in it? https://t.co/fLzzZFjlak

Potatoes are self-pollinating, meaning they are the ultimate intersex species.
Maybe cracking open a science book will do you more good than a book written centuries ago by people who did not know where the sun goes at night. https://t.co/ylfUbTVhz0

Always causes problems when people mistake the poetry of an ancient tribe of roving sheep herdsmen for a science textbook. https://t.co/LgOte8Il8X

But it was a follow-up question from writer and Human Rights activist, Charlotte Clymer, that really paid off.

David, serious question: how do we know the potato toy is male?

This was Brody’s response. 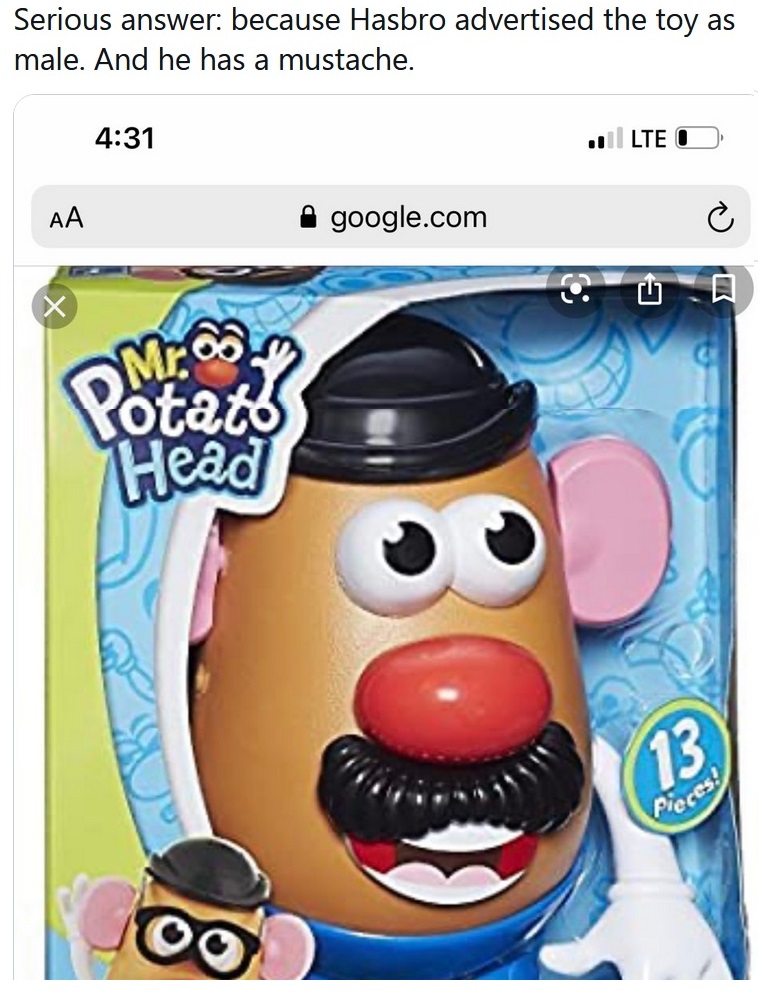 Which was definitely not the slam-dunk he thought it was.

So, let me get this right: because the potato toy presents and identities as male, you respect his decision and need no supposed scientific validation? 🤔

This guy is just too good to be true. May I present the perfect if unintentional argument in support of trans people https://t.co/dAcDtHLjL7