The weekend saw the anniversary of Rishi Sunak becoming Chancellor of the Exchequer, after Sajid Javid left due to a row over Dominic Cummings – remember him? – dismissing the department’s advisers and replacing them with staff answerable to him. 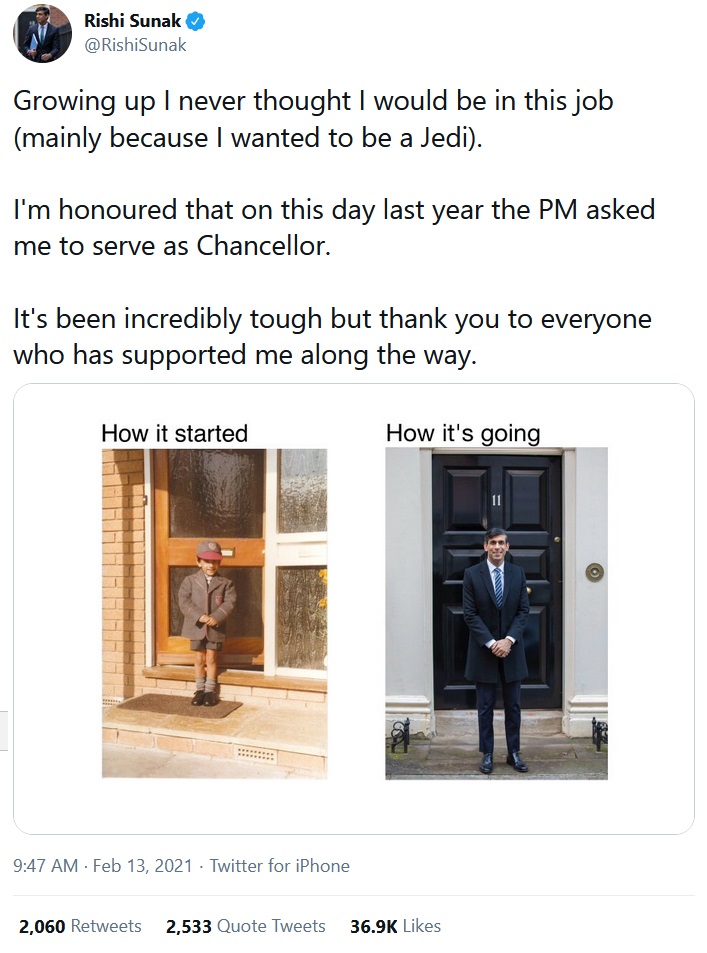 A heartwarming story of a young boy born to affluent parents, sent to an elite private school, then Oxford, who got a job in investment banking, before becoming the wealthiest MP in Parliament and voting for policies that plunged millions of working class people into poverty… https://t.co/JJY0gBdZQM

She was far from the only person to be unimpressed by the Rishi Rich origin story – or his year in office.

And what a year! The highest covid death rate in the world & the worst economic slump in 300 years.
I'll buy you a light sabre if you want. https://t.co/mHqdDeu11P

inspiring to think that we live in a country where the head boy of winchester college can grow up to marry the daughter of a billionaire and oversee the worst response to Covid-19 of any major global economy while facilitating a six-figure death toll https://t.co/Rj0gCEZthz

Just goes to show that if you work hard and are a privately educated graduate from Oxford who went on to marry the daughter of a billionaire, you too can go on to Nando’s thousands of people to death https://t.co/yh5Qqxaxes

"Growing up I never thought I would be in this job (mainly because I wanted to be a Jedi)…"
How it started. How it's going. pic.twitter.com/UlDlDPtvS5

It's so amazing that once you were a child and now you're chancellor. We should have more politicians who started out as children. https://t.co/iAn8fL7dAp

Jedi: Apparently Rishi is busy in his back garden building something? pic.twitter.com/QBrMvh3cpa

Could have been a Jedi, ended up Chancellor. Hmm, why does that feel familiar…? https://t.co/K7hSKCcpWk pic.twitter.com/YBAnNn0tdf

Anyone remember the bit where Luke Skywalker voted against feeding hungry kids? https://t.co/vJEVROTqEq

No idea why people are mocking this. Winchester's only had 6 Chancellors to Eton's 15. Always going to be a long shot. https://t.co/hyUm9YRqD4

The very funny Sir Boothby Graffoe had a different interpretation.

In 1987 he locked himself out the house. They've changed the door several times over the years but they still haven't let him in. https://t.co/oGp4J8pRMP