There was a lot more surprise than disappointment when the impeachment trial of Donald Trump failed to result in a guilty verdict, as nobody really expected Republican senators to vote against him.

The fact that a majority of the House believed he had incited insurrection – though not the two thirds necessary to convict – didn’t stop Trump’s son, Eric, from posting what he thought was a triumphant tweet. 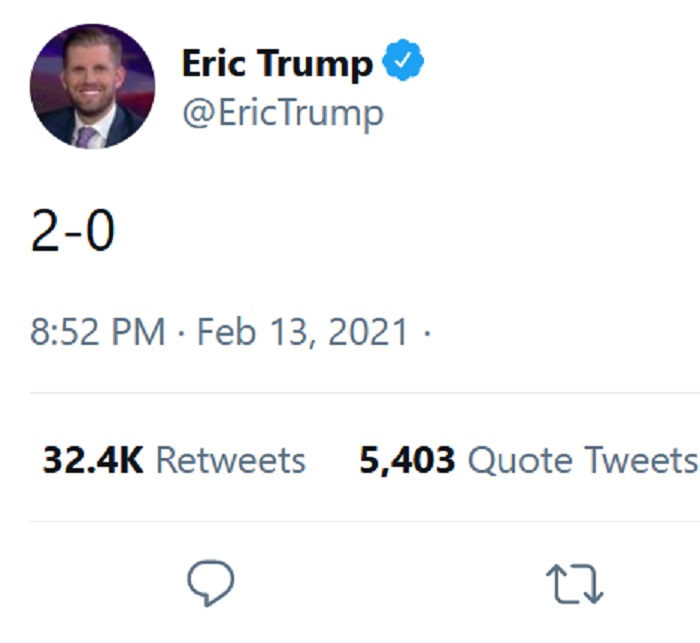 The trouble with that is that it simply serves to highlight that his dad was impeached – twice.

The takedowns came thick and fast.

Lost the House, lost the Senate, lost the White House, twice impeached. Trump is a loser.

0-61 in election fraud court cases and 0-1 in successful insurrections. 1-0 in largest nonpartisan vote to convict on impeachment. 57 patriotic Senators voted to convict, 43 trumplican insurrectionists voted for the Insurrectionist in Chief.

when you think getting impeached twice and escaping conviction constitutes a winning streak https://t.co/Ya9NrxTcgE

This isn’t the flex you think it is… https://t.co/dglr2dVXnp

Wouldn't want my son to be reminding the world that his dad was impeached twice — TWICE — the first president in our history to have "won" that dubious distinction. https://t.co/jkXapcJWIr