Because there aren’t enough actual problems to worry about now that the UK is enjoying the post-Brexit sunlit uplands, right-wing columnist, Richard Littlejohn – who lives in Florida – has been forced to imagine problems, just so he has something to write about. 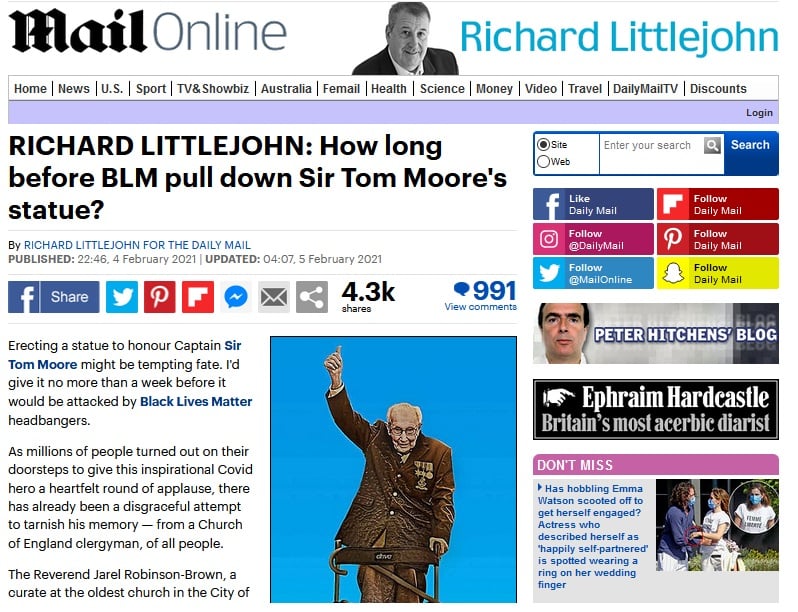 Eminent solicitor, Nazir Afzal, pointed out one major flaw in the suggestion.

Nonsense
Why would anyone do this?

Captain Sir Tom wasn’t racist & stood up for our NHS which is 25% from minorities & he did so at a time when the majority of NHS staff dying from Covid were from those communities because the Govt didn’t prepare https://t.co/H4FAHqvYHf pic.twitter.com/WACeeWQey8

Otto English had another.

Richard Littlejohn attacking people who don't exist for planning to pull down a statue that hasn't been erected pic.twitter.com/BLy2mGObpQ

Here’s how other people reacted. It’s not always safe for work.

The most interesting aspect of Richard Littlejohn publicly shitting his pants over something that doesn’t even exist is that he appears unable to see any difference between a slave trader and Sir Tom Moore. pic.twitter.com/Wgx9zPO9cD

We’re in a pandemic that’s killed 110,000 people, surely you can think of bigger problems that need addressing than “they’re going to tear down a statue I’ve imagined” pic.twitter.com/1vQb83LX1i

How long before Richard Littlejohn gets a proper job? pic.twitter.com/kRcfXnia8l

There is no statue of Capt Sir Tom. BLM has expressed no opinion about Sir Tom, nor his non statue. The ONLY statue to have been ‘pulled down’ was that of a c18th slaver who traded in black misery. Also Richard Littlejohn is a disgusting shitmonger. Fuck him. pic.twitter.com/sqzSIUAyvq

I'm going to write a column called 'How long before Richard Littlejohn wanks into the Holy Grail and sprinkles it on a statue of Dame Vera Lynn'? Well, he might do.

How long before Richard Littlejohn kicks my dog to death for no reason? (I do not own a dog)

BREAKING: Richard Littlejohn has had to call the nurse for more tranquillisers after exploding with fear that a statue to Handforth Parish Council might be pulled down by pro-Jackie Weaver protestors.

"HOW LONG BEFORE BLM PULL DOWN CAPTAIN TOM'S STATUE?" thunders Richard Littledick in the Mail, despite the fact that there is no Captain Tom statue and he wasn't a slave trader

How long before Richard Littlejohn churns out yet more paranoid garbage for the Daily Mail? pic.twitter.com/hIUJaeV9cr

attacking black people for doing something they haven't done to a statue that doesn't even exist, standard pic.twitter.com/pjtojZnrXJ

I heard Richard Littlejohn went to the park and made a statue of Captain Tom out of playdoh and put it on a bench then hid in a bush waiting for BLM people to tear it down.

What I heard anyway

That’s a nice straw man you’ve built, Mr Littlejohn. It’d be a shame if it were to …catch fire.