As chaos reigned on Capitol Hill, with a vast MAGA crowd running, out of control, through the seat of Congress, Trump’s aides begged him to address the supporters and defuse the volatile situation.

He did the first part of that. In a video, which you can watch here, if you’re interested, he asked the insurgents to go home, but he also fanned the flames of their fraudulent claims …and said he loved them.

“I know your pain. I know you’re hurt. We had an election that was stolen from us. It was a landslide election, and everyone knows it, especially the other side, but you have to go home now.”

“There’s never been a time like this where such a thing happened, where they could take it away from all of us, from me, from you, from our country.”

“We love you. You’re very special. You’ve seen what happens. You see the way others are treated that are so bad and so evil. I know how you feel. But go home and go home at peace.” 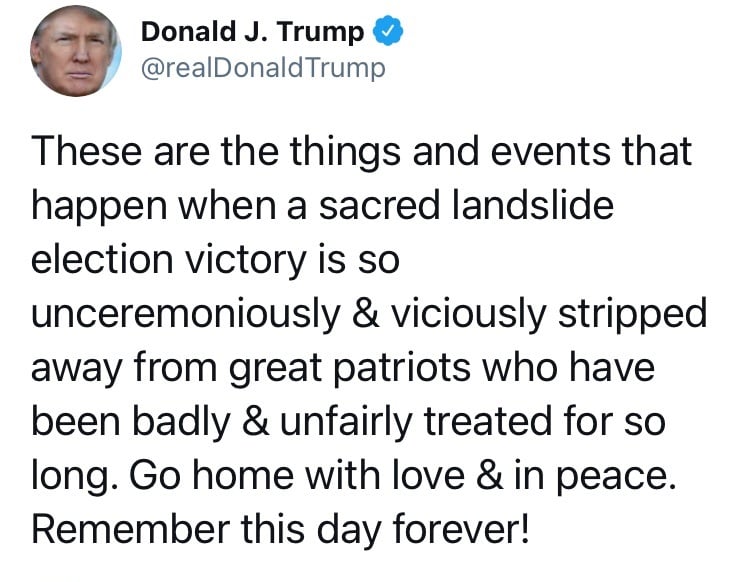 At first, Twitter took steps to limit the spread of the tweets, and to warn readers that they were problematic on several levels.

Under pressure from tweeters, Twitter subsequently changed their approach, forcing the president to delete his tweets, along with one posted earlier in the evening.

They also suspended his account, for a minimum of 12 hours.

As a result of the unprecedented and ongoing violent situation in Washington, D.C., we have required the removal of three @realDonaldTrump Tweets that were posted earlier today for repeated and severe violations of our Civic Integrity policy. https://t.co/k6OkjNG3bM

This means that the account of @realDonaldTrump will be locked for 12 hours following the removal of these Tweets. If the Tweets are not removed, the account will remain locked.

Future violations of the Twitter Rules, including our Civic Integrity or Violent Threats policies, will result in permanent suspension of the @realDonaldTrump account.

Our public interest policy — which has guided our enforcement action in this area for years — ends where we believe the risk of harm is higher and/or more severe.
https://t.co/ZcbhDEAYjH

We’ll continue to evaluate the situation in real time, including examining activity on the ground and statements made off Twitter. We will keep the public informed, including if further escalation in our enforcement approach is necessary.

Here are some of our favourite reactions to these unprecedented developments.

just in the nick of 5 years late! https://t.co/JksJWwM8kY

Twitter bans Trump for 12 hours. Can't imagine what he'd have to do to be banned for a whole 24

Suspended from all social media, @realDonaldTrump is currently ranting about Mitt Romney on an Amazon customer review page for dress socks.

Trumps twitter feed has been suspended for 12 hours …. cause he's an arsehole

But hey nice job finally slapping his wrist when his term is ending in two weeks, you fucking complicit idiots. https://t.co/O2W4ffO4JM

Since he was suspended from Twitter Trump is now on Onlyfans.

Trump has been suspended for 12h. That's probably not enough for him to open a can of beans.

Of course, it’s a suspension – not a ban.

.@realDonaldTrump has deleted the tweets that led to his suspension, starting the 12-hour countdown to him being able to post again, Twitter says.

So now we have The First Tweet Back to look forward to.

I think Twitter needs to ban Trump for good. It’s already better without him.

In conclusion, some words of wisdom from Dr. HawaiiDelilah™.

If you get suspended on Twitter and Facebook, maybe you need to get suspended from holding the nuclear codes. https://t.co/6WhjR9msMv

next story
Breaking News: Gavin Williamson said nobody predicted schools would close - the only 5 responses you need