As Trump supporters swarmed past barriers on Capitol Hill to invade Congress, the BBC’s political editor, Laura Kuenssberg shared a video of the unfolding incident, with a fairly noncommittal description. 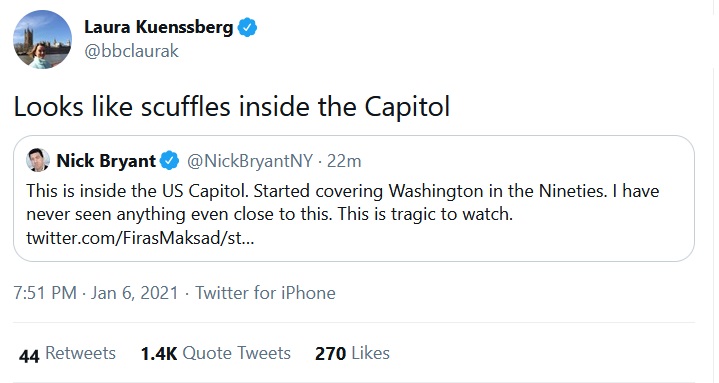 In fairness to her, the original tweet by Firas Maksad used the same word.

Scuffles & violence inside the US Capitol pic.twitter.com/47UCAux3gP

“If Firas Maksad stuck his hand in the fire, would you do it too?”

How the BBC political editor reports far-right fascists storming the Capitol in an attempted coup: https://t.co/a0U4rvD6e5

Tweeters reacted with a mixture of scorn and sarcasm.

Scuffles ? Fuck sake Laura a scuffle is when two women fight over the last toilet roll in Tesco’s – I take it the Iran Embassy siege was a kerfuffle then? https://t.co/KekUWC42B6

This is like when they called it “The Troubles” in Northern Ireland. https://t.co/qyiXsEOYHz

Scuffles are what happens outside a provincial Wetherspoon's on Curry Club night. This, Laura, is an attempted coup by white surpremacists.

Think maybe a trip to Specsavers is due Laura

Yeah, apparently they've knocked over a dustbin in Shaftesbury

Simply tear gas fisticuffs as guns are drawn in the chamber!!! A simple fracas from the fash pack!! https://t.co/vA86Fzu4ar

While every one of those responses was a powerful takedown in its own right, we particularly enjoyed seeing the unexpected social justice heroes of 2020 – and now 2021 – Jedward, telling her how to do her job.

Laura can you tweet about Politics @bbclaurak this isn’t a reality show you are reporting about it’s real life facts and news!

As they say on social media – “shot, chaser”.

A Twitter fight is a Scuffle @bbclaurak Don’t down play something very serious! example: Simon on xfactor had a scuffle with Jedward about how talented and incredible their hair is!

next story
Breaking News: Bernie Sanders' coat and mittens combo gave us the best meme of the inauguration - 26 favourites