Over in the US people hit financially by the coronavirus – so most people, then – are receiving $600 each as part of a second round of federal help.

Not everyone was impressed, however, including this person whose response went viral on Reddit after it was shared by beerbellybegone who said: ‘You dense mother [email protected]#ker!’ 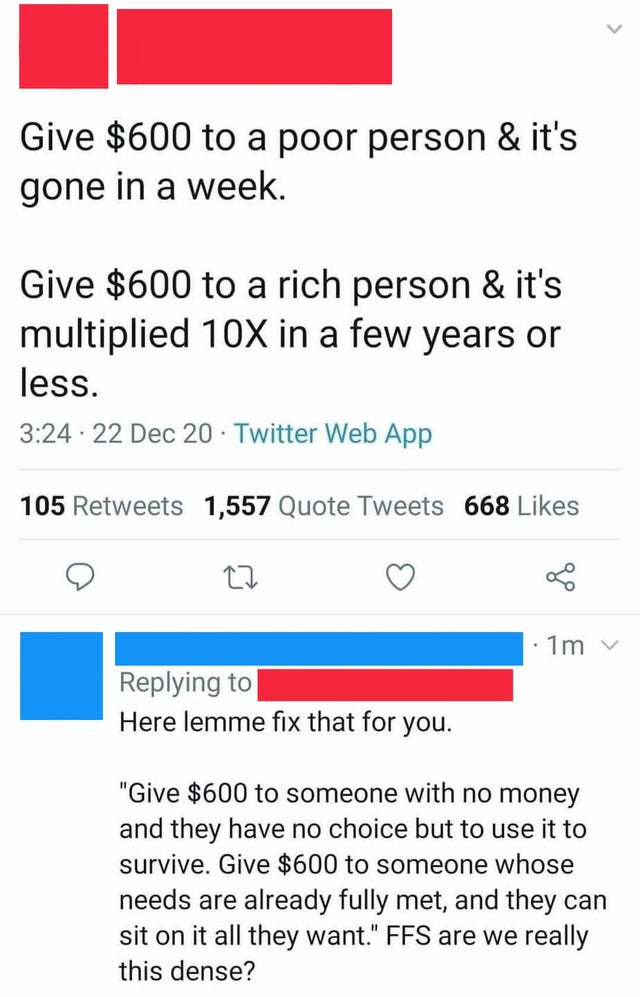 ‘I mean, wouldn’t spending the money in a few weeks be the objective of sending stimulus money anyways? Storing and investing the $600 for a few years wouldn’t really do the economy any good now.’ ElderBop

‘You are correct, this is the literal point of the stimulus checks: to immediately stimulate or fuel the economy.’ dmsmikhail

It baffles me that people still believe in trickle down economics. The economy is fueled by the middle and lower class spending money. When they don’t have money to spend, the economy does poorly.’ seagoddesslady

Well if anyone could turn a 10x return consistently every “few years”, they’d be the richest person on the planet.
And this person doesn’t know what multiplier or velocity is.’ Wrong2wrong2

‘Once again proving that, for an alarming amount of people, money > another human life.’ SpasmodicColon

next story
Breaking News: The takedown of this misogynistic troll went viral because it's simply epic