In the all-time self-own hall of fame, this is surely somewhere close to the top.

It’s Jenna Ellis a constitutional law attorney and senior legal adviser to outgoing president Donald Trump and his team, taking aim at ‘liberals’ who don’t like being told the truth.

And it’s so good we can’t stop looking at it, highlighted by @jimmfelton over on Twitter. 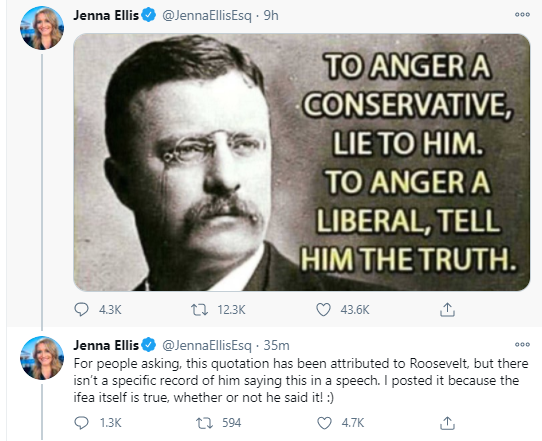 ‘For people asking, this quotation has been attributed to Roosevelt, but there isn’t a specific record of him saying this in a speech. I posted it because the ifea [sic] itself is true, whether or not he said it :)’

It’s the lack of self-awareness that gets you most. Well, that and everything else.

So, if I understand you correctly, your point is that the truth is irrelevant to the pursuit of the truth. Fascinating.

For people asking, this quote has been attributed to Jenna Ellis, but there isn't a specific record of her saying it. The idea of her saying it is true! 🙂 pic.twitter.com/pM6qCEa1zd

“To announce that there must be no criticism of the President, or that we are to stand by the President, right or wrong, is not only unpatriotic and servile, but is morally treasonable to the American public.”

This brutal takedown of a fellow gameshow contestant is hilarious