Chancellor Rishi Sunak delivered a crucial spending review on Wednesday, setting out the cost of the pandemic, and measures to deal with the financial fallout.

Public sector wages came off badly, with a pay freeze, and the spring rise in benefits will fall way below the rising cost of living. He also announced his intention to remove the pledge to pay 0.7% of GNI in overseas aid – slashing it to 0.5%, against the promise in the last manifesto.

David Cameron, who introduced the pledge, was most unhappy, as were many Conservative MPs.

I deeply regret today’s decision to break our promise to spend 0.7% of GNI on development. Here’s why: pic.twitter.com/Yv9XDhPCNs

It wasn’t just MPs unhappy about it.

Even if you don't care on humanitarian grounds,do you see the link between reducing the overseas aid budget and increasing the defence budget? It's a short link @RishiSunak

I think I get it. We are cutting foreign aid so we can look after our own, but looking after our own is socialism, and if people don't like that they should move to another country, but not like when other people try to move here because their countries can't support them. Wait.

But isn't the *whole point* of tying aid to a % of GDP that you don't *need* to cut it when GDP drops, on account of the way it so very obviously cuts itself? 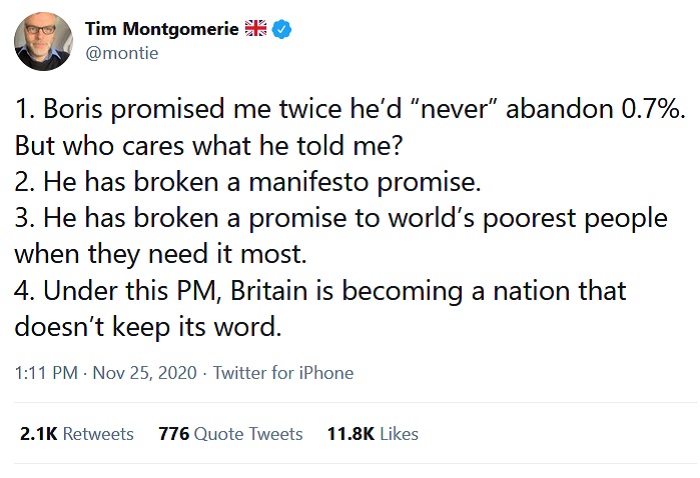 While many people found themselves in the surprising position of agreeing with him that the move was both a mistake and a broken promise, they couldn’t help but be baffled by his naivety.

These five responses hit the spot.

How could you have known that someone who was sacked twice for lying, lied to The Queen and cheated on two wives might break a promise?#SpendingReview https://t.co/Ts9qrqneOA

Welcome to our world Tim ! https://t.co/RfhCLH93xh

Man behaves in his 57th year exactly as he's behaved in his first 56.
Shocking. https://t.co/PlDBGn1t2k

Curator of ‘The Week In Tory’, @RussInCheshire summed up the move.

When you lose ConservativeHome, you're no longer a Conservative. We have a Libertarian Nationalist party in charge, and none of us voted for one of those. https://t.co/Nn5ju6PsQx

By an odd coincidence, the PM had shared a letter he claimed to have received from an 8-year-old, named Monti.

I've had lots of letters about this, so I have spoken with experts and can assure you that Father Christmas will be packing his sleigh and delivering presents this Christmas! pic.twitter.com/pXwcjHSxZg

He should write to Santa.

All I want this year is a PS5 and for Boris Johnson to have a change of personality.“