In phrases you don’t hear too often, Pythagoras has just gone viral with this rather brilliant cup that lots of people are coming across for the first time.

Turns out the Ancient Greek philosopher didn’t just do triangles – obviously he did lots more than that – he also designed this.

It was shared on Reddit by j4ck132 who said this about it: ‘Pythagoras created this drinking cup as a practical joke. When it is filled beyond a certain point, a siphoning effect causes the cup to drain its entire contents through the base.’ 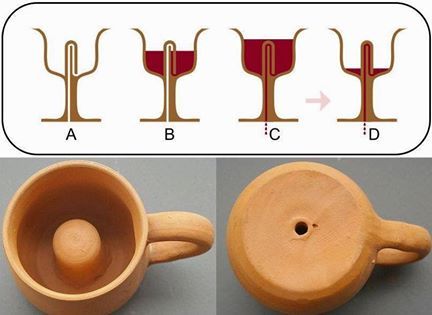 You can read more about it here, and here it is in action.

Although lots of people pointed out it wasn’t so much a practical joke as a handy device to make sure people didn’t drink too much. Funny and practical!

‘It wasn’t a practical joke, it was so that everyone got the same amount of wine and nobody was over served or drunk at his teachings.’ ravenspeaks88

‘Yeah I totally wouldn’t be suspicious of someone handing me a cup that has a giant nipple inside.’ loduca16

‘I learned that in ancient Greece, it was seen as a virtue to drink just enough to loosen up and let unhindered conversation and ideas flow, but not too much as to start slurring and stumbling. Being able to stay right at this threshold, drinking bit by bit throughout the night was a valued skill amongst philosophers and their students.’ Orion_NQ1

And the learning didn’t stop there!

‘Fun fact this is how toilets work.’ crystal_daddy

It’s been quite the day.

next story
Breaking News: 'Anti-maskers throughout history' is a hilarious takedown of the covidiot tendency