The saga of the US presidential election has dragged on and on, with more than a week having passed since news agencies called the race for Joe Biden and no sign of a formal concession from the incumbent.

But it seemed to edge a little closer on Sunday morning, when Trump tweeted this: 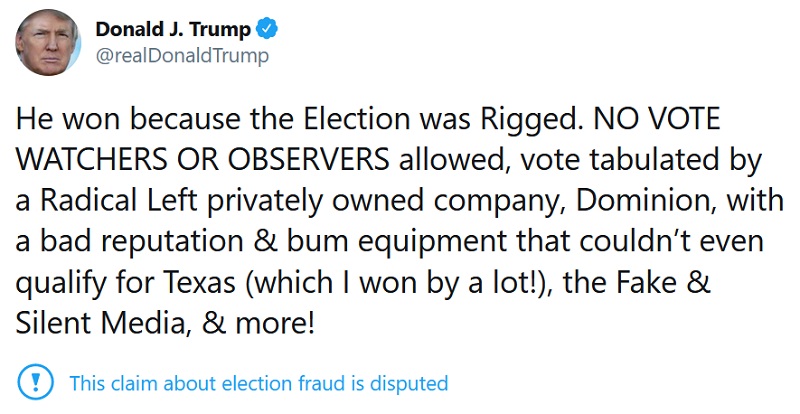 Of course, being a Trump tweet, the admission was followed by a string of false claims, which were swiftly flagged by Twitter, who must surely have a worker devoted to labelling the President’s tweets.

Twitter leapt on the accidental concession. These were the best responses we spotted.

And there it is. Trump concedes.

This is progress, Don. You wrote the words “He won.” I suggested starting a journal to write down your feelings.

let's un-Fox this tweet:
— there is no evidence to support your claims of fraud
— your own lawyers admitted this to more than one judge
— you keep losing lawsuit after lawsuit
— your lawyers have quit
— and all you have left is Rudy Shirt-Tucking Colludy
— you lost
— get over it

You knew Trump's concession speech would be nothing but a lie filled, Sunday morning tweet.#TrumpFinallyConcedes pic.twitter.com/20sOTCfUXH

Quite funny that even his concession gets flagged for misinformation pic.twitter.com/6RNZsZk2li

“He won” is the most honest thing Trump has ever tweeted. #TrumpFinallyConcedes

Sorry some of your transmission got garbled there but I think the message came through just fine pic.twitter.com/boxZf5aoSi

You literally told several federal judges this exact same thing, and they all laughed you out of the courtroom. Then your legal team quit on you and admitted that there was no voter fraud.

Just give up already!

His own niece, Mary Trump, added this kick in the ballots.

Fixed it for you: pic.twitter.com/tVoiVJCRNt

When he eventually realised what people were saying about his tweet, he posted an update.

He only won in the eyes of the FAKE NEWS MEDIA. I concede NOTHING! We have a long way to go. This was a RIGGED ELECTION!

the votes that sealed Trump's demise were counted by state elections officials, not the media. https://t.co/CVOBbqh4Wt

Too late, anyway, Donald. The world said “No backsies.“