The singer and TV presenter was a permanent fixture in the ITV schedules back in the day and there was no shortage of tributes (we rounded up some of the best here).

He was famously the butt of many Eric Morecambe jokes over the years, and they don’t come much better than this one, shared by journalist Piers Hopkirk (and originally from the Times diary). 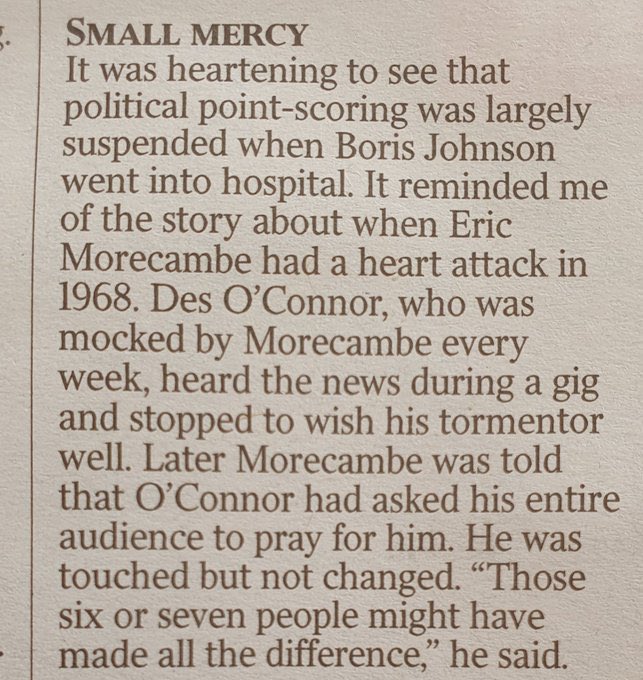 ‘It was heartening to see that political point-scoring was largely suspended when Boris Johnson went into hospital. It reminded me of the story about when Eric Morecambe had a heart attack in 1968.

‘Des O’Connor, who was mocked by Morecambe every week, heard the news during a gig and stopped to wish his tormentor well.

‘Later Morecambe was told that O’Connor had asked his entire audience to pray for him. He was touched but not changed. ‘Those six or seven people might have made all the difference,’ he said.’

Their banter was the best, eventually creating one of the funniest guest scenes on Morecambe and Wise 😂

I remember Des claimed to be a self made man. Eric replied “it’s nice for someone to take responsibility”.

Love this- ranks with the Bob Monkhouse “when I go I want to go like my dear old dad…” joke https://t.co/92upLyEO6V

Or the time Des told Eric that he had become a limited company. Eric says ” So you should, you’re a limited performer”

The story that always sticks in my mind is when Des visited Eric in hospital near the end and asked if there was anything he could do for Eric, he replied “Just give it all up”

And here they are in action together.

They loved him…he loved them…

next story
Breaking News: This Countdown-style game on live TV started badly and just got worse