Flaming Lips lead singer Wayne Coyne has been rolling around in a giant see-through bubble at the band’s gigs for some time now.

But thanks to the pandemic it’s not just the singer who’s in a bubble. Now the audience is too and it’s quite the sight …

The Flaming Lips performed a gig in bubbles to an audience also in bubbles last night. pic.twitter.com/XzNRKWvPn4

What a time to be alive. And here are just some of the things people said after it was shared by MookieT on Reddit.

‘As someone who likes to catastrophise, my first thought was how nightmarish it would be if the fire alarm went off.’ DizzyHeron3

‘How the hell did they not suffocate after hours spent in an almost hermetically sealed plastic ball?’ paolopao

‘Lol I work in events (in normal times lmao) so my mind goes to the bad scenarios super easily, I would love to read their risk assessment.’ DizzyHeron3

‘We will supply the place with a huge pool stick and professional, giant pool players.’ TheReal_KindStranger

‘Too complicated. Just suspend porcupines from the ceiling from water soluble strings. If the fire alarm goes off, the sprinklers will release the porcupines, who will drop down and pop the bubbles, allowing the patrons to escape.’ goose-and-fish

‘Too complicated. Just makes the giant bubbles super-flammable so in case of fire they automatically disappear.’ sintaur

‘This looks like something from an 80s movie about the 90s.’ burningcookies4this

‘I wonder how many of them are trapped in a fart hell.’ 6pAz6uZu6

The gig took place in the band’s hometown of Oklahoma City. Here’s what it looked like when they were setting up, 100 bubbles in a 4,000 capacity venue, apparently. 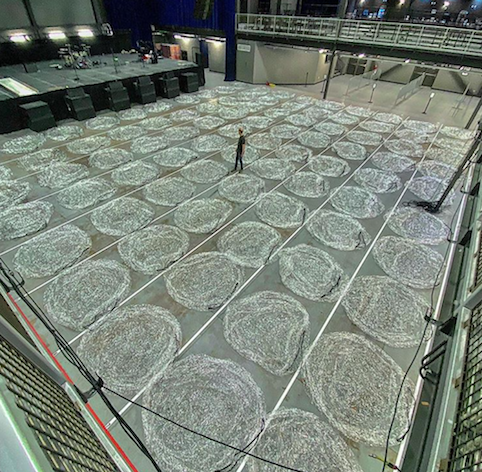 next story
Breaking News: Melania Trump spoke out against hate and negativity - the only 5 gobsmacked reactions you need