Very possibly the most delightful thing you’ll see this week, the dog captured in the back of this TV news broadcast which is making the entire internet go ‘awwwww!’

It was shared on Reddit by Heisenberg1899 and, well … 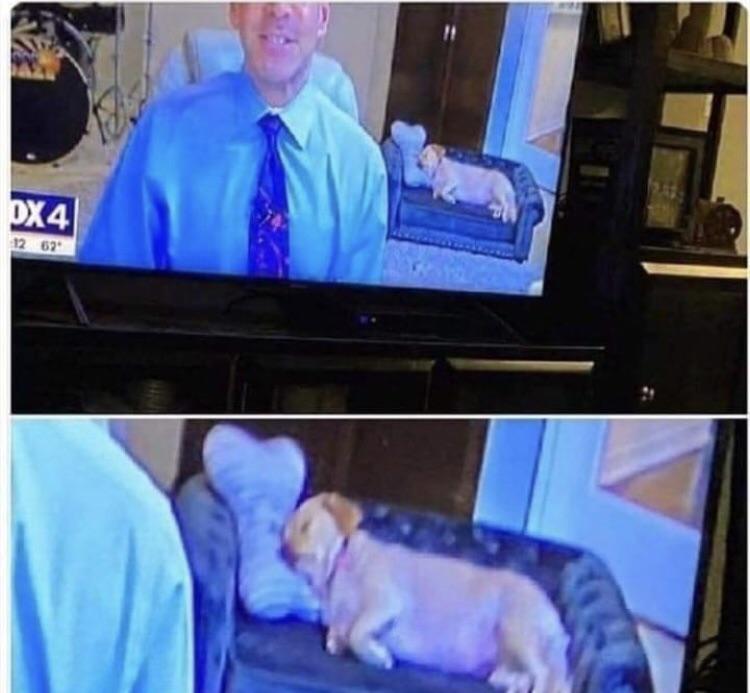 And here are our 6 favourite things people said about it.

‘That dog’s face says “I’m not really sleeping but I was here before you started recording. I’m not moving!” hrakkari

“I know the situation in the Middle East is dire, but I’m waiting for my walk!” Frenchticklers

‘Excuse me: IT HAS ITS OWN DOGGO SIZED COUCH.’ Belleniel

‘And the pillow is shaped like a bone.’ breadedfishstrip

I’m a little tired right now so my brain was frazzled when I saw this , I thought it was either a really big dog or a really small couch, I’m assuming it’s the latter.’ dopepope1999

‘Neither. Everything is giant sized. Even the reporter. He’s Hagrid’s brother, Grawp.’ Channel5exclusive

Turns out it’s the station’s weather forecaster and the dog makes regular appearances.

‘This is the weather forecaster at the local Fox station in DFW, early on during the COVID, he removed the dogs from out of camera view and there was a huge response to bring the dogs back. I’m glad he did, as a local in DFW, this is always a highlights of my morning.’ withaph64

‘Finally, a news program reporting on the important stuff.’ judocouch

next story
Breaking News: This AI camera kept mistaking the linesman's bald head for the football and it's fantastic