After three days in hospital being treated for Covid-19, Donald Trump has returned to the White House.

Here he is, posing for photos flanked by two flags – without a mask, despite being in the infectious stage of the disease.

wanna be dictator full of covid and on steroids pic.twitter.com/p6g8n4l4Vk

Before he left the hospital, he tweeted this update.

I will be leaving the great Walter Reed Medical Center today at 6:30 P.M. Feeling really good! Don’t be afraid of Covid. Don’t let it dominate your life. We have developed, under the Trump Administration, some really great drugs & knowledge. I feel better than I did 20 years ago!

Rather than having been pumped full of experimental drugs to treat a serious respiratory condition, it makes it sound as though he’s spent a few days at the Coronaspa.

The right thing for Trump to say would be, "the great care I've received taught me the folly of my ways. Covid is serious, I'm immediately dropping the lawsuit against the ACA, & will use my remaining time in office to push for universal health care." Instead we get this shit. https://t.co/GCDKPdUZkM

A lot of other people spoke out to condemn the President.

“Don’t be afraid of Covid” should be the end of Trump’s presidency and the Republican Party.

Don't be afraid, says the guy with a team of a dozen doctors, access to experimental treatments that no one else gets, a four room hospital suite, who lives in a house with top doctors on site 24/7.

All of which is provided to him for free because he refuses to pay taxes. https://t.co/uGScoBTiTt

"Don't be afraid of COVID" – from the guy who demanded that you be terrified of caravans in Mexico, refugees, immigrant children, Muslims, Barack Obama, peaceful protesters, the Deep State, George Soros, and any number of people who posed no actual danger. https://t.co/DYxW0zeVEj

Just as many people simply mocked his bragging.

‘I feel better than I did 20 years ago’ pic.twitter.com/UB1buLCNmk 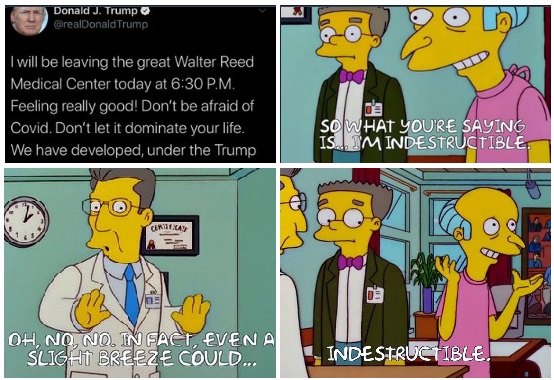 “I feel better than I did 20 years ago!" pic.twitter.com/W23j6cMhUa

next story
Breaking News: Alexandria Ocasio-Cortez had the best takedown of a Fox News host who trolled her photoshoot