Sainsbury’s marked Black History Month by confirming their support for a diverse society and workplace with this message.

It boils down to “racists not welcome”, which seems like an uncontroversial standpoint, but it wasn’t.

It irritated a lot of people, who took such offence at Sainsbury’s suggestion to stay away if you don’t support diversity that they threatened to *checks notes* stay away.

One question kept cropping up – “When is White History Month – or day?” and this response was about as good as it gets.

This Sainsbury’s social media chap has a better grasp of reality than the best-paid columnists in the country. Kudos to Chris. pic.twitter.com/QFzQlhuICX

There was also a great deal of support for Sainsbury’s, as well as scorn for the attitude of the people complaining about the notice.

Shop at Sainsbury’s if you don’t want to be around racists. https://t.co/IO93jkyAip

I can’t believe the reaction to this. Actually wait, I can. This country is full of racists who have decided Sainsbury’s have made up Black History Month and that trying to make Black colleagues feel as safe as possible is segregation. Ffs man. https://t.co/nC2khrgRRr

“So you see, they won’t be able to object without outing themselves as bigots. Nobody wants to be seen as a bigot. It’s foolproof” pic.twitter.com/WXgk7VkZeZ

Sainsbury: "We want racists to shop elsewhere"
Racists: "I will take my revenge by doing exactly what they want me to do!" #RightWhingers https://t.co/TretggNjPe

Unsurprisingly, the head of the UK’s newest nationalist party, Laurence Fox, was one of the loudest objectors. 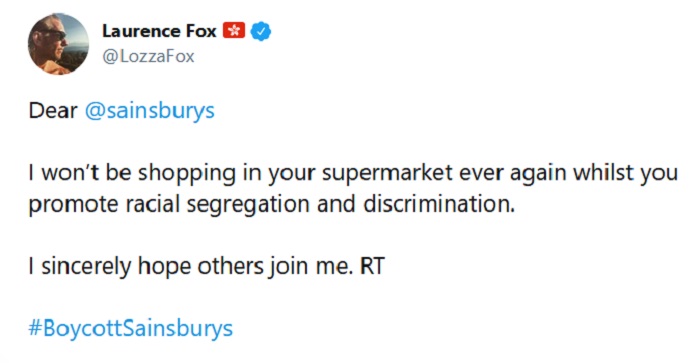 He was NEVER out of Sainsbury’s as well – what a clackwanker pic.twitter.com/J9xepHmhWK

They specifically asked racists not to shop there. You can’t own somebody by following their exact instructions. pic.twitter.com/7d57hrnCn8

Dear @sainsburys — I will feel so much safer shopping in your stores now I know there’s no chance of bumping into Laurence Fox. Thank you. Yours, a loyal customer https://t.co/Y4OdFKrTew

So to recap. Laurence Fox now wants to cancel Sainsbury because they think racism isn’t brilliant.

Can’t wait to see the uniforms for his new *party*

Laurence Fox: this cancel culture is so, like, woke, yah. We must end it

Finally, Lulu suggested there might be a hidden bonus.

To everyone refusing to shop in @sainsburys because Sainsbury's are celebrating #blackhistorymonthuk, I'm delighted. Shopping in Sainsbury's will be a much happier & safer experience without you particularly as you tend to be the idiots who refuse to wear masks.

The scourge of wokeness, Laurence Fox, is launching a political party – the 9 funniest takedowns