The scourge of wokeness, Laurence Fox, is launching a political party – the 9 funniest takedowns

Laurence Fox, the Harrow-educated member of a respected acting dynasty, has spent months broadcasting via several media outlets about his disgust at being “cancelled”, and he now – apparently – plans to amplify his complaints further by launching a political party.

The news was broken by The Telegraph’s Christopher Hope.

Fox boosted the news with this bit of hyperbole. 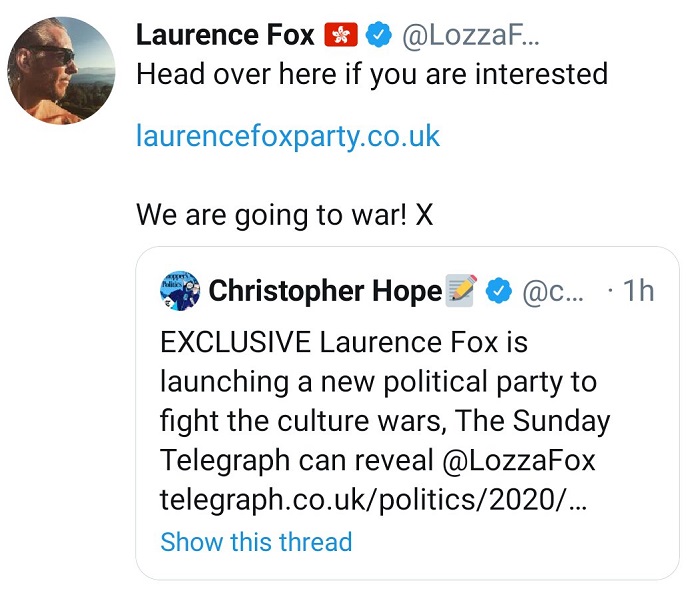 The "These Days You Get Sent To Prison Just For Saying You're English" Party https://t.co/uCtgKDa9Sf

While others just took the piss.

"What did you do in the Culture Wars, grandad?"

"Because it was a bunch of bullshit invented by entitled reactionaries whining about being victims whenever their privilege was challenged, like Laurence Fox."

laurence fox has just launched a new political party. I’d give it five minutes if I were you

The party polticial broadcast will just be 5 minutes of Ricky Gervais saying he identifies as a helicopter whilst Laurence quietly sobs in the background listening to Honey To The Bee by Billie Piper https://t.co/vxqkTyKnxP

I think this is good, actually. Think of all those lost deposits going to the Treasury. Call it “Idiot Tax”. https://t.co/Yo1vQf8iiC

And Dr. Mike Galsworthy had another.

This is fantastic news. The Lozza Party can join the new UKIP spin-out Heritage Party just launched and the Brexit Party all chipping away at Conservative Party support from the crazy flank, but with no MPs. I raise a glass to this. https://t.co/ZFyVsA0GLM

Can’t wait for their manifesto launch in a Spider-Man suit from half way up Big Ben. https://t.co/2ZRD01drE3