The creative activist group, Led By Donkeys, began by placing politicians’ own words on billboards to highlight their hypocrisy.

There was this tweet from David Cameron, which looks increasingly ridiculous as time passes. 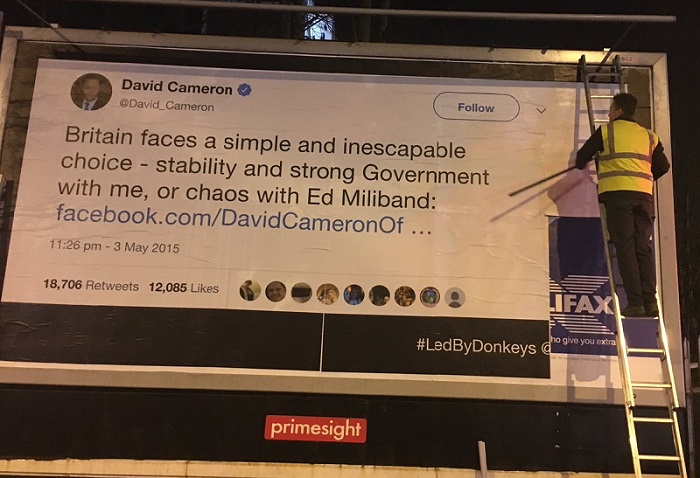 We can’t imagine David Davis being able to defend this position now – particularly in Kent or Northern Ireland. 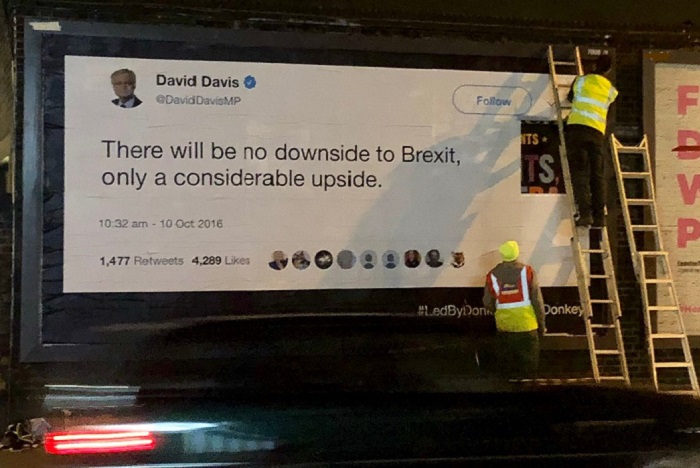 They also managed to take a swipe at both Boris Johnson and his role model, Donald Trump, when the President visited the UK.

Hey @realDonaldTrump, you just endorsed your Brexit buddy @BorisJohnson but he said some VERY NASTY things about you and he doesn’t want you to know. So we projected his words onto Big Ben. Watch with the SOUND ON #TrumpUKVisit pic.twitter.com/etUb6tk9eX

Their latest campaign once again turns its attention to Trump – specifically his response to the coronavirus. Watch what they’ve done.

“I’m going to be working for you. I’m not going to have time to go play golf.”

from Donald Trump GIFs via Gfycat

These reactions say it all.

The characteristic of all populist leadership, from Trump to Johnson (and others), is that the gulf between words and reality is as wide as from here to the moon… thank you @bydonkeys https://t.co/je7HSDkkfo

Of course, the wonderful Janey Godley staged her own protest at Turnberry.

Four years ago today, I stood at Turnberry with a sign that even the cops couldn’t argue with. As Trump exited his helicopter in the background and I stood firm. I was on Scottish Land ( the pavement) not Trump property so they couldn’t move me. #happyturnberryanniversary pic.twitter.com/iNmJG7AE4w

Me and trump have beef pic.twitter.com/M8LxSwzjSd

next story
Breaking News: Fox News said their 'damning' Biden documents got lost in the post and the takedowns were 1st class