Want the full list of Rule of Six exemptions? You’re in luck

People were up in arms that the government had made shooting and hunting exempt from the Rule of Six law. Apparently, they both qualify as organised sport – which is a bit rough if you’re a grouse or a deer.

However, there were a lot of other exemptions, and the brilliant Hopeless Surfer gathered them into this handy (parody) chart. 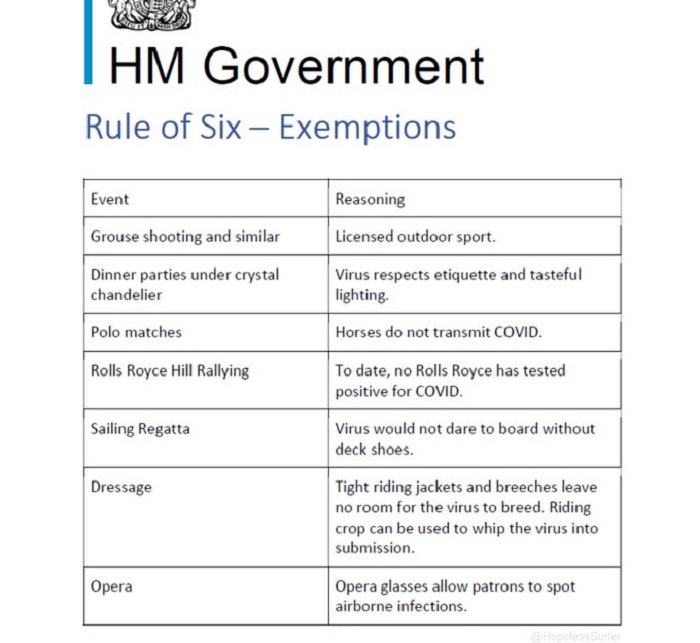 Although one or two responses seem to have gained an exemption from being able to take a joke, we’ll focus on the positive, with these appreciative comments.

The explanation we've all been waiting for. (Bravo @HopelessSurfer) https://t.co/JaLhRlmlVf

Thank God for the fourth one, as I have just finished knitting out my second Rolls for hill rallying. https://t.co/1GyR87G22C

Thank goodness for this clarification… but only in England.. https://t.co/z7CSJiK9Qj

Some people weren’t sure whether it was genuine – and this is why.

I mean going by @BorisJohnson @Conservatives logic this meme would probably be the unfiltered version. https://t.co/xsMtcSy2ph

When real life seems more of a pisstake than satire, pity the comedians.

next story
Breaking News: This sports stadium filled its stand with the entire town of South Park and it's brilliant