After a series of disastrous revelations and statistics relating to their handling of the UK’s response to Covid-19, Public health England is to be scrapped.

The important government update was released by the Telegraph’s Christopher Hope via a Twitter thread, beginning at 9:34 on Saturday night.

EXCLUSIVE Sunday @Telegraph splash
Public Health England will be scrapped and replaced by a new body to protect country against a pandemic next month.
Matt Hancock to merge Covid-19 work of PHE with NHS Test and Trace to create National Institute for Health Protection. 1/

The thread, like the article it heralded, explained that PHE’s replacement would be a new institute which would be formed by bringing science elements from the defunct body and combining them with the Test and Trace facilities – probably under the leadership of Test and Trace’s current head, Dido Harding.

Some people were thrilled by the news. 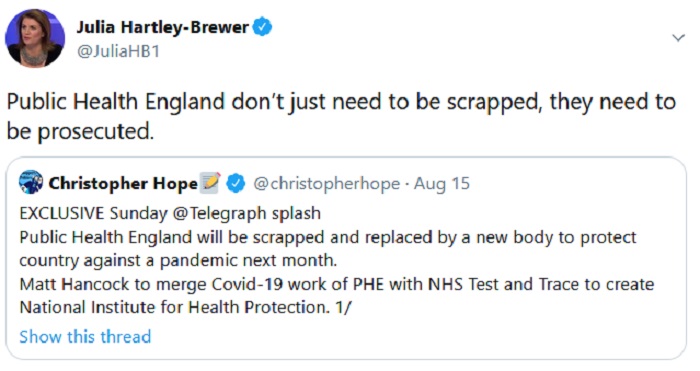 A lot more weren’t. Here are some of the best responses we saw.

Government to scrap Public Health England and merge it into NHS Test and Trace which is great news as the latter has been an absolutely world-beating success. https://t.co/nHfhn95nAj

Dido Harding is uniquely qualified to run this replacement for Public Health England. Not only has she overseen the shambolic test and trace operation and the massive data breach at TalkTalk, but she's married to a Tory MP who wants to scrap the NHS. https://t.co/QUv1080tav

Surely even the government must know by now with their record this will be a disaster. But I suppose we can already predict it’ll be a shell company in Barbados owned by Matt Hancock’s second wife or something and she lists it on companies house as ‘a chicken farm.’ https://t.co/XEqn9dVuJY

just because someone has messed things up before it doesn't necessarily mean they will… ah Dido Harding? sorry then yes it will be an absolute cataclysmic disaster

What could possibly go wrong? https://t.co/t7dqEWdyi3

Dido Harding has proved that she is incapable of running a bath, never mind this latest wheeze from the DoH. https://t.co/Ls0he9MdIi

next story
Breaking News: Actors are sharing the big parts they missed out on and it's a glorious testimony to what might have been