It started out as a meme aimed at flat-earthers and the confusion that presumably results. 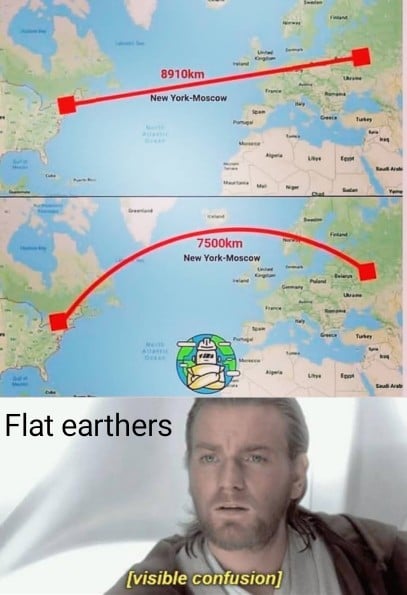 But it turned out it wasn’t just flat-earthers who couldn’t quite get their heads round it.

‘Dude same. I figured air current or something. I definitely did not invest enough brain power thinking about it before this meme.’ MeatSweats91

It’s a shorter route because the earth’s not flat, obviously. It just might take a bit of thinking about.

‘Even if you aren’t a flat earther, it’s enough to cause some confusion. You end up debating between

– Curved to get into more optimal air currents; ok, makes sense, no issues here.
– Curved to align with the globe; um, I’m looking at a 3d route on a 3d globe superimposed over a 2d image with the different altitudes causing a weird perspective that drives me insane.
– Some combination of air currents, projection, and map representation that melts your mind.

‘The weird perspective issue is a very unnatural thing to look at, we aren’t use to looking at a mix of 2d and 3d projected onto 2d, we tend to do either/or 2d/3d.’ 2560synapses

‘In short, the projection of the spherical earth to a flat, rectangular map introduces distorion, meaning that a straight line on the globe will become a curve on the map.’ MaczenDev

‘For everyone asking, since the Earth is a sphere, the fastest route is actually curved, as you would be going around the less thick part of the earth.’ nlegendaryguy

And if you still don’t get it – we’re sure you do – there’s always Wikipedia.