When Lynn Staffieri got a notification from her Nest doorbell, she was surprised to see an Amazon parcel delivered in a highly unusual fashion.

The delivery person left the parcel, said something that Lynn couldn’t hear on the vision-only clip, and then ran away from the house like her life depended on it.

Lynn did some digging and soon got to the bottom of the mystery before sharing the audio-enabled version.

She added this explanation.

Thank you to this great Amazon delivery woman! Apparently, my youngest son, had put some ‘additional instructions’ for delivery and she went along with it.

It made us smile even though my son should not have done that so I apologize for that. I do appreciate that the driver looked closely enough at the instructions though because I know a lot of people wouldn’t.

And this is the instruction Lynn’s 13-year-old son, Jacob, had added to the Amazon order. 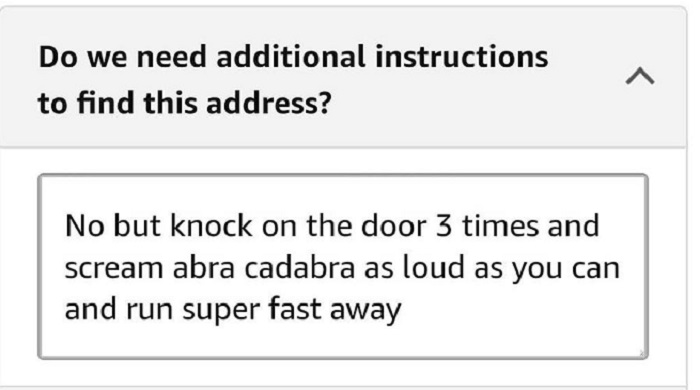 The joyous post went viral, with the clip making it to several news outlets and picking up delighted comments from Facebook users.

Here are a few we really liked.

That is so Awesome, I’m still replaying and laughing at the same time.
Deseree Hall

Hilarious! That worker gets an A+!!
Cathleen Brown Webb

The driver, Eloiza Sanchez, identified herself, but we don’t know whether she has responded to Lynn yet.

Delivery driver of the week