Takedown of the day

Over on Twitter someone called @BrianduNord someone pointed out how much better parts of Europe are coping with coronavirus than the US.

Which prompted this fellow American to stand up for Trump’s record by pointing out how much bigger the US is.

And the comeback was perfect.

‘Percentages are just so confusing,’ said beerbellybegone who shared the exchange on Reddit. 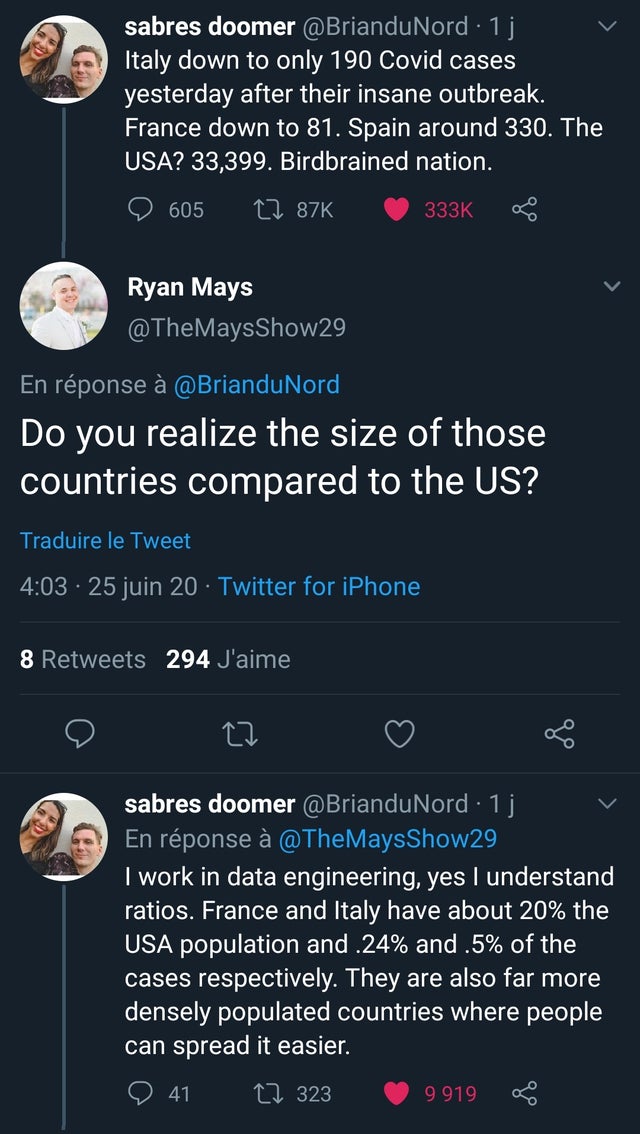 Although, it should be added, it eventually ended with handshakes all round. Well, not exactly handshakes, obviously.

well that’s one way to shut his ass up

You’re not going to shut me up, I simply said the pure numbers are misleading and in all actuality per capita is a better standardization which shows that the more densely populated country as said previously, has a high death rate per capita for the corona virus

It’s like 500 per million versus 370 per million, of course I also recognize that that death rate could be an indicator of more adequate resources or a younger population overall that doesn’t die but is still infected at a higher rate…

Going on per million is also a stat that will be a pretty bad comparison in about a month as the virus is now spiking across the nation instead of just nyc, Boston and Seattle. I get what you’re saying, the actual number right now isn’t wildly worse, but it will be very soon.

Very true, sorry if I can off as any bit rude, not trying to, I love stats and do recognize that depending on the stat used, the picture can change. Regardless think, the U.S. handled this incorrectly from the start.

Absolutely and no worries, the velocity of the change is what is alarming to me, and this long after the virus first came, which shows how badly Americans are at this.

This would be wholesome if weren’t all finna die

next story
Breaking News: "If people today were on the Titanic" is 58 seconds very well spent