Here’s Donald Trump on Fox News asked what his priorities would be if Vladimir Putin was to win him a second term as president (we paraphrase, obviously).

And his answer really is worth listening to in full because …

Asked what his top priorities for a second term are, Trump can’t name a single thing pic.twitter.com/fF6xXaDAy0

It’s even scarier written down. 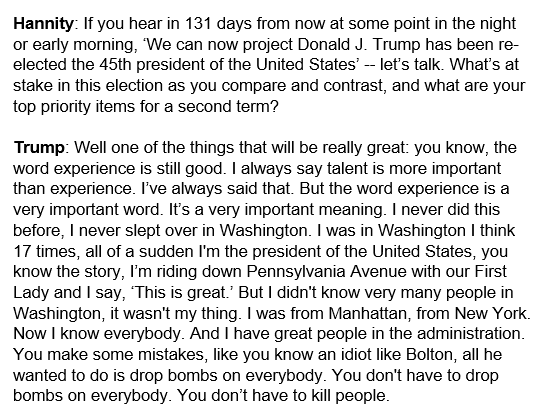 My IQ dropped reading that

Is this for real???? The transcripts of his speech are insane. It sounds bad when you hear it, but it’s just batshit crazy on paper.

This happened a bit later and it definitely belongs in the same bracket.

Trump still hasn’t figured out that World Wars 1 and 2 weren’t contagious diseases (also the troops who fought those wars voted by mail) pic.twitter.com/AmjS568unB