Well, minds being blown might be overstating it just a tiny bit, but this fact shared on the subReddit ‘interesting as f-ck’ went viral because, well, have a read for yourself.

‘And curious as it may seem, this shape uses FEWER bricks than a straight wall. A straight wall needs at least two layers of bricks to make is sturdy, but the wavy wall is fine thanks to the arch support provided by the waves.’ 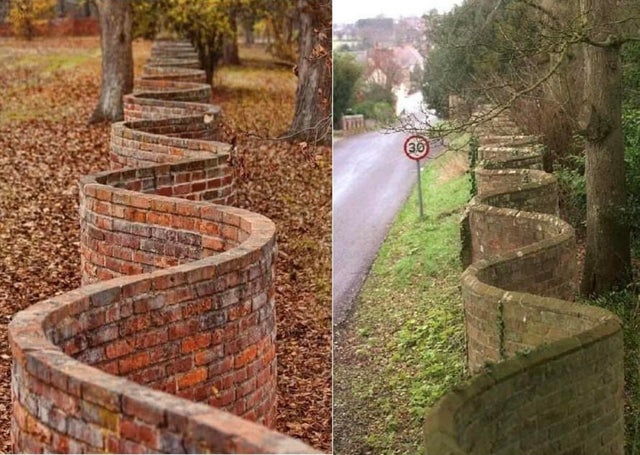 ‘This is a lawn mowers worst nightmare!’ TristedOpinions

‘I live in England and I’ve never seen one.’ LTHankAnderson

‘There’s like 75 in the whole country, mostly in Suffolk. They’re not very common. Usually a wall is used to border your land and you lose ground making a wall like this. They may be efficient with bricks but there’s a lot of reasons not to use this design unless you’re trying to be quirky.’ TannedCroissant

‘This is the first post I’ve seen in a while that was actually interesting as fuck.’ jjmj24

‘The title is close, but not quite. The issue isn’t with the ‘strength’ or ‘sturdiness’ of the wall, so much as its balance. The serpentine shape effectively thickens the footprint of the wall by quite a bit, making it much more stable against toppling. Properly proportioned, the serpentine shape can be more brick-efficient than other strategies for stabilizing a tall, narrow structure (like adding piers or buttresses). One extra course of bricks, while doubling the materials bill, wouldn’t widen the effective footprint of the wall nearly as much as any of those other options.’ cryptotope